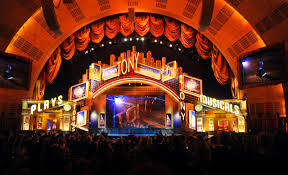 Tony night is my favourite television night of the year. It is my Super Bowl. As someone who almost never turns on the television, it is the time when I surround myself with people who will silently revel in the performances and speeches and promise only to talk during commercials – I just don’t want to miss any of it.

Last Sunday’s awards were no exception, and I loved getting to watch them. Here are my highlights and lowlights:

I absolutely love Jake Epstein. Seeing him on TV on the Tonys was pretty special. While I don’t know them well, seeing Ramin Karimloo, Samantha Hill, Cliff Saunders, and Nick Cordero (possibly Melissa O’Neil too… not sure if she was in that Les Mis number) reinforced what we all know already – we have the best musical theatre talent anywhere.

Ok… I am bad with pop culture. I don’t watch TV and I don’t get to see many movies. But honestly, who were all those people?!?! Am I the only person who didn’t know Emmy Rossum, Kate Mara, Zachary Quinto, Zachary Levi, Leighton Meester, Matt Bomer, Anna Gunn, Vera Farmiga and Alessandro Nivola? Ok… I probably am the only one who doesn’t know who they are. But really, I want to see Mandy Patinkin, Bernadette Peters, Patti LuPone, Angela Lansbury, Nathan Lane, etc. Give me more of them please.

I saw the show one week before the Tonys. I liked it, but didn’t love it. The number they performed (“I’ve Decided To Marry You”) was a winner in the show and translated even better on TV. It made me want to go back and see it again. Well done team GG! (Side note, it wasn’t until the next day that I realized that our very own Chilina Kennedy had played Phoebe D’Ysquith in early pre-Broadway productions. Man, I would have liked to see her in that role. She’d be terrific.)

Finding Neverland is one of my favourite movies. Jennifer Hudson is a singer that I really admire. But mix these two together and I get confused. What the heck was going on? Hudson in a ball gown performing as if it was American Idol. A bunch of costumed kids propped up on a bed as if Julie Andrews was professing love for whiskers on kittens. A Peter Pan ballet. Huh?

Rare are the moments where you watch history happen. How lucky musical theatre fans are to still have many years with the performer who holds the most Tony Awards. She is just amazing.

He’s a wonderful actor and director. Maybe he shouldn’t be presenting two awards at the Tonys.

If I ever am lucky enough to get Tony nominated and lose, this guy really showed me how to take it standing up:

Those are my hits and misses. What were yours?