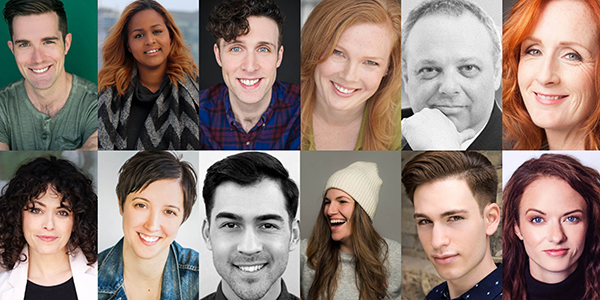 After an incredible inaugural year of LAUNCH PAD and the sold-out run of REPRINT (in partnership with The Globe and Mail), The Musical Stage Company and Yonge Street Theatricals are overjoyed to announce the creators and collaborators for the second year of this innovative musical theatre creation initiative.

The composers, lyricists and bookwriters that comprise the second edition of LAUNCH PAD will work in teams to create original one-act musicals inspired by the short stories of acclaimed Canadian authors and take their musicals through a full developmental process over the next 10 months. The triptych of new works will debut in September 2020 at the historic Toronto Reference Library with a public presentation produced in association with Toronto Public Library.

Ticket information for the September 2020 production will be announced in Spring 2020.

LAUNCH PAD is a collaboration between The Musical Stage Company and commercial producers Yonge Street Theatricals (Come From Away, Life After).

For The Musical Stage Company, this strategic initiative is enabled through a 2-year commitment from a group of private sector champions led by BMO Financial Group and with catalyzing support from Leading Lights: William J.S. Boyle C.M.; Di Bartolomeo, Di Lorenzo-Graham Foundation; The Slaight Family Foundation; Lucy White; and an Anonymous supporter.

For The Musical Stage Company, LAUNCH PAD is the latest addition to its robust portfolio of programs and initiatives designed to make Canadian artists leaders in musical theatre. Since the company’s expansion and rebranding two years ago, The Musical Stage Company has increased its annual investment in writers by 290% and inaugurated The Aubrey & Marla Dan Fund for New Musicals to commission new work, The Crescendo Series to provide a multi-year residency for a composer with a commitment to produce their work, and continued its NoteWorthy program to provide foundational skills to artists interested in writing musicals.

ABOUT THE MUSICAL STAGE COMPANY

The Musical Stage Company is Canada’s leading charitable musical theatre company. Established in 2004, we strive to make Canada a leader in musical theatre by telling our most important stories with music. We believe it’s better with music.

We are inspired by music’s unique ability to viscerally affect people and are committed to cultivating experiences – onstage and off – that transform lives, build empathy and create community through musical theatre.

We incubate new Canadian musicals from development to production, investing in Canadian musical theatre writers and building national and international partnerships. Our musical productions – including award-winning contemporary musicals, world premieres and concerts– are seen live by 30,000 people over the 80+ nights that we are onstage annually in venues both traditional and surprising. To date, our work has been recognized with 96 Dora Award nominations, 21 Dora Awards (including back-to-back Outstanding Musical Production awards in 2018 and 2019) and 17 Toronto Theatre Critics’ Awards. Our robust education programs develop the artists and audiences of tomorrow, offering musical theatre training that boosts self-confidence and self-expression for over 200 young people each year without cost to the participants. We also curate innovative musical programs in partnership with diverse organizations, maximizing the resonance of our work across disciplines and communities. Learn more by visiting www.musicalstagecompany.com

Yonge Street Theatricals is a Tony-nominated, Barrymore award-nominated, Olivier award-winning and multiple Dora award-winning production company, led by Linda Barnett and Natalie Bartello. The duo have been working together, in new musical development, at the grassroots level for the last fourteen years. They develop original musicals and support and nurture exceptional works from their earliest stages. At the heart of their mission they strive to collaborate with the most exciting and engaging theatre professionals with an eye for shows that appeal to a wide audience.

Linda’s former company Stage Kids was the starting ground for many award-winning Canadian actors. They created and produced 17 new musicals in an 18 year period. Stage Kids provided a place for youth across the city of Toronto to receive a free education in musical theatre.

Natalie is an alumna of York University’s Honours BFA Theatre program and of the Commercial Theatre Institute (Chicago). Past producing highlights include the Canadian National Tour of Defending the Caveman and the original Toronto production of Evil Dead The Musical.

Current YST projects include: Come From Away (Toronto, New York, London, Australia and North American Tour), Diana; the electrifying new musical about a woman who chose to be fearless, and as a result became timeless (Upcoming Broadway – March 2020), Life After; a musical by Britta Johnson (6 Dora Awards including Outstanding Production of a Musical *Toronto Star – Top 11 Stage Shows of 2017, *The Globe and Mail – Best Theatre of 2017), Pollyanna; a new musical by Steven Gallagher and Linda Barnett (short-listed for the Stage West Best New Musical Award); Wally Flynn; an original musical by Steven Gallagher and Eli Bolin (2018 ASCAP Foundation award recipient) and Jake Epstein’s Toronto Fringe Hit; Boy Falls From Sky.

Daniel Abrahamson (composer/lyricist)
Daniel Abrahamson is a composer and lyricist in Toronto, ON. He composed the scores for “Funny Business” (Best of Fringe, published by Samuel French), “Act Now” (Best of Fringe), and “Hugh and I” (Patron’s Pick). He’s the 2019 recipient of the Tom Hendry Award for Best Musical in Development from the Playwrights Guild of Canada for “Stars of Mars” which will premiere at Sheridan College February 2020. In May 2020 his new musical “Super School!” will premiere at Bravo Academy. Daniel is a second year member of the BMI Lehman Engel Musical Theatre Workshop in NYC, where he sold out a concert of his songs at 54 Below in March 2019, and will debut a second concert at Birdland Theatre in December 2019.

Tamara Bernier-Evans (director/dramaturge)
Tamara is a producer, director, dramaturge and actor for both live theatre and television. She is best-known for her portrayal of Tanya in Mamma Mia! on Broadway. She was the Assistant Artistic Director at Tarragon Theatre (where she directed Midsummer) and is a co-owner of Awen Entertainment Ltd.