We departed early Monday morning and pulled up to the Skyline Hotel at West 49th St and 10th Ave. around 7 p.m.; it was four students to a room. We spent that first night wandering around Times Square; candy stores, Toys-R-Us and neon lights. I don’t really remember what we did during the days (Central Park, the Metropolitan Museum, Harlem… it’s all kind of a blur) because the real reason I went on the trip was to go see Broadway musicals.

I had been to New York twice before and seen three shows. but this trip was particularly exciting because Mandy Patinkin was starring in a new musical on Broadway called The Wild Party. I was a big Mandy fan because of the PBS recording of Sunday in the Park with George, but was even more excited to see the show after seeing Mandy’s co-star, Toni Collette, perform a number on the Rosie O’Donnell show (check it out). I begged my teacher, Ms. Kemp, to see it- and she told me that if tickets were available for it at the TKTS booth she would do her best.

I must have been buzzing with anticipation all afternoon after Ms. Kemp told me she had tickets for a group of students to see The Wild Party (some students were going to see a play, other were going to talent night at the Apollo… All I wanted was to see a musical, dammit!).

Parts of that show are forever etched into my memory – Toni Collette’s performance was a masterclass in triple-threat excellence, Mandy was fierce and scary, the score was super sexy. And then there was Eartha Kitt. As  the faded star Dolores Montoya, Ms. Kitt walked away with the show. She was intense, ravishing and incredibly funny.

After the show, Ms. Kemp took us to stage door to meet the cast. They were all so friendly… well… except for Mandy. He came out and declared he’d take one picture and sign one autograph; I got my nudged my playbill in front of him and got his signature while one of my class mates to their pic with him and then he pushed his way past the crowd. 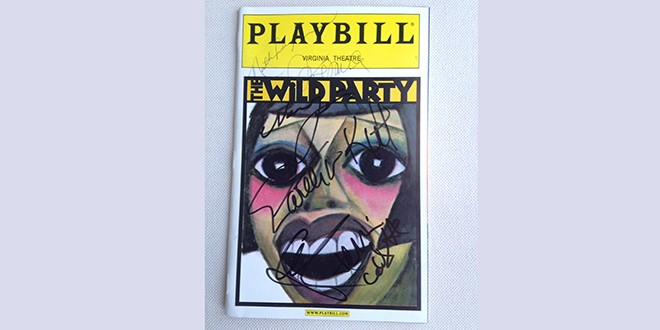 Eartha Kitt was pretty much the same off-stage as she was on-stage: bold, vibrant and hilarious. She had just been nominated for Tony Award the week before and as she signed her autograph I told her she was “totally gonna win.” She stopped writing, looked up at me with her magnetic eyes and purred “And if I don’t, can I come back and haunt you?” I instantly became a devoted fan.

Toni Collette, who had been nominated for an Oscar earlier that year for The Sixth Sense, was the last person to come through the stage door. She was the epitome of graciousness and humility and spent about 15 minutes talking to me and my classmates and taking pictures with everyone individually. She was a star.

The next day, we had an hour of free time to walk around Times Square. I headed over to the Virgin Record Store (I still can’t believe it’s not there anymore) and bough the newly released cast recording of The Wild Party. I also bought a fresh pack of batteries so that I could spend the entire bus ride home with Queenie, Burrs, Dolores, Toni, Mandy and Eartha on my Discman.