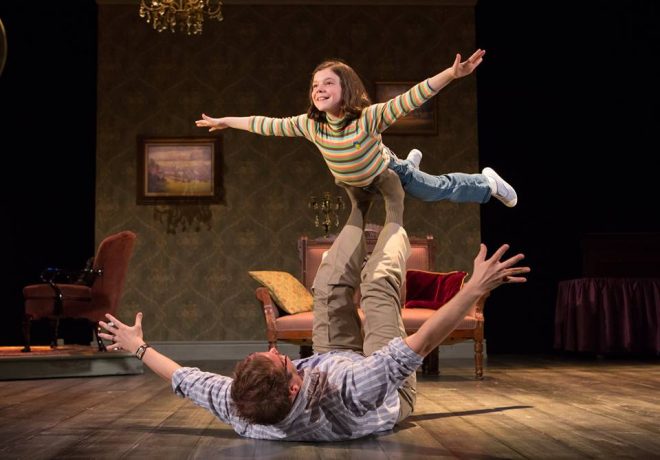 Alison, a 43-year-old lesbian cartoonist, struggles to untangle her complex relationship with her deceased father. Moving between past and present, Alison relives an unusual childhood growing up in a funeral home, her sexual awakening and unanswerable questions about her father’s secret life.

This ground-breaking new musical based on Alison Bechdel’s best-selling graphic memoir was the winner of 5 Tony Awards, including ‘Best Musical’, and has received worldwide critical acclaim for its stunning musical score and heartbreaking storytelling.

★★★★/ 4 STARS – Exquisitely heart-wrenching. The Musical Stage Company’s biggest production to date feels like an unmissable one. —The Globe & Mail

assistant to the music director

Performances are at the CAA Theatre, 651 Yonge Street (formerly the Panasonic Theatre).

NNNNN (out of 5) The Musical Stage Company and Mirvish’s production of the Tony Award-winning adaptation of the Alison Bechdel graphic novel memoir will break your heart. I can’t imagine a better Canadian cast.

What is the running time of the show? 100 minutes

Is there an intermission? No

What is the seating procedure for latecomers? Latecomers will be seated at an appropriate time.

Is the theatre wheelchair accessible? Yes, please make sure you inform the box office when purchasing your tickets so the necessary arrangements and seating location can be arranged.

Do I need to purchase tickets in advance? If the performance isn’t sold out, there will be tickets for sale at the Box Office before the curtain. However, we highly suggest purchasing tickets beforehand to avoid disappointment.

What is the ticket refund/exchange policy? There are no refunds or exchanges.

MARQUEE is a free arts program that seeks to empower LGBTQ2S youth in Toronto by connecting them to the stories and songs of the musical Fun Home. MARQUEE is open to anyone ages 16 – 29 who identifies as LGBTQ2S. No previous experience in the arts is necessary! There are limited spots. We particularly encourage applications from LGBTQ2S folks with diverse experiences, particularly those who are: Two-Spirit, transgender, non-binary, Indigenous, Black, People of Colour, people with disabilities, living with mental illness, and/or have experiences of homelessness.

MARQUEE is brought to you by The Musical Stage Company and TD, in partnership with The AMY Project.

For more information on how to apply to the program, click here. Applications are now closed.