LAUNCH PAD is an innovative program that makes a strategic investment in leading Canadian musical theatre writers and collaborators. LAUNCH PAD is a new collaboration between The Musical Stage Company and commercial producers Yonge Street Theatricals.

Each year for two years, LAUNCH PAD will offer a 10-month residency in which musical theatre composers, lyricists and bookwriters navigate a full developmental process, shepherding 30-minute musicals from conception to production with guidance from skilled creative teams and internationally renowned mentors.

LAUNCH PAD is an innovative program that makes a strategic investment in leading Canadian musical theatre writers and collaborators. LAUNCH PAD is a new collaboration between The Musical Stage Company and commercial producers Yonge Street Theatricals.

Each year for two years, LAUNCH PAD will offer a 10-month residency in which musical theatre composers, lyricists and bookwriters navigate a full developmental process, shepherding 30-minute musicals from conception to production with guidance from skilled creative teams and internationally renowned mentors. 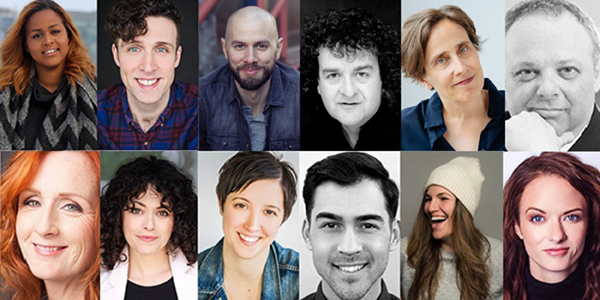 Ben Elliot (composer/lyricist)
Ben is an actor, composer, sound designer, multi-instrumentalist and musical director in Vancouver, BC. Favourite credits include playing The Bellhop in the Canada wide tour of Chelsea Hotel: The Songs Of Leonard Cohen (Firehall), The Western Canadian tour of Matilda The Musical (Citadel/RMTC/Arts Club) where he appeared as Mr. Wormwood and for which he received a Winnipeg Theatre Award; and his role as Silvius and musical director in The Beatles version of As You Like It, which has appeared at Bard On The Beach, RMTC and The Citadel. He is Jessie and Sterling award nominee for his work on the show. He is also set to musical direct As You Like It again at Chicago Shakespeare and Milwaukee Repertory Theatre. Ben has co-written two musicals with Anton Lipovetsky; The Park (Studio 58) and The Best Laid Plans (Touchtone). Ben is a graduate of Bishop’s University and Studio 58.

Sarah Garton Stanley (director/dramaturge)
Director, dramaturg and conversationalist, Sarah Garton Stanley is originally from Montreal, now lives in Kingston. She is the Associate Artistic Director of English Theatre at the National Arts Centre, and leader for The Cycle(s). Sarah was the founding Artistic Director for SpiderWebShow and is now its Executive Producer, she is also a former Artistic Director of Buddies in Bad Times Theatre. During her award-winning career, Sarah has worked across Canada and overseas. Most recent directing credits include Fun Home (RMTC) Sexual Misconduct of the Middle Classes (Tarragon)The Big House (TOFringe) Unsafe (Canadian Stage); Out The Window (Luminato/Theatre Centre); Kill Me Now (Royal Manitoba Theatre Centre production in collaboration with NAC English Theatre); Bunny (Stratford Festival); Helen Lawrence (Canadian Stage, Brooklyn Academy of Music, Munich Kammerspiele and elsewhere) and We Keep Coming Back (Jewish Culture Fest, Krakow, Poland and Ashkenaz Festival, Toronto). Sarah received the 2016 Literary Managers and Dramaturgs of the Americas’ Elliot Hayes Award, the 2017 Manitoba Theatre Award for best direction for Kill Me Now and the 2018 Honorary Member Award for Canadian Association for Theatre Research. Sarah has loved co-curating with Chantal Bilodeau the Green Rooms as part of the Final Cycle focusing on Climate.

Ellen is a writer and performer with two plays in development. Wonder – a historical drama about Harriet Brooks, Canada’s first female nuclear physicist – is being workshopped in February 2019. Pleasureville, a contemporary comedy about a city gal opening a small town sex shop, will premiere in fall 2019. As an actor, Ellen has appeared on stages across Canada. Her portrayal of Alice in Life After (Musical Stage/ Canadian Stage/Yonge Street Theatricals) earned her a Dora nomination and a passion for new musical development. She is thrilled to participate in both NoteWorthy and Launch Pad this season with Musical Stage.

Tracey is one of Canada’s busiest and most respected directors and choreographers with credits that span over 180 productions internationally. Selected credits include: We Will Rock You (Toronto, South Africa, Asia, US National/Broadway tour), ONCE (The Grand Theatre/RMTC), Million Dollar Quartet (Charlottetown Festival), West Side Story (Rainbow Stage), Evita (Vancouver Opera), Buyer & Cellar, Venus in Fur (ATP), Cabaret, Billy Elliot, Jane Eyre, The Penelopiad, The 39 Steps (RMTC), Kiss Me Kate and Evita for the Stratford Festival. Tracey continues her 17-year association with Ross Petty Productions and their Annual Toronto tradition of the Christmas Panto.

Steven is a writer, actor and director based in Toronto. His award-winning play, Stealing Sam, made its American premiere in 2014 where it won Best Drama at the United Solo Festival in New York. Pollyanna, written with Linda Barnett, was shortlisted for Playwrights Guild of Canada best new musical. Drama 101, written with Kevin Wong, premiered in Toronto in June 2017. His musical, The Last Party, written with Nicky Phillips, premiered at the Toronto Fringe in 2018. He is the recipient of a 2013 Harold Award.

Johnson and Johnston (no relation) are a Dora Award-winning team of writer/director/performers who collaborate in many ways, most recently on Dr. Silver: A Celebration of Life which Anika wrote (with her sister Britta) and Barb developed from its origin as choreographer and assistant director. Shared writing credits include Blood Ties, Summerland, and One Small Step; Anika and Barb can also be seen together on stage in Toronto and internationally as Sporty and Ginger in Wannabe: The Spice Girls Tribute Band.

Anton is a composer and performer based in Vancouver. His composition credits include Elbow Room Cafe (ZeeZee), Best Laid Plans (Touchstone/Patrick Street), cool beans (Solo Collective), Broken Sex Doll (Virtual Stage/Jessie Award) and FLOP! (Delinquent). He is a graduate of the Stratford Birmingham Conservatory and Studio 58.

Six seasons at the Stratford Festival where she recently directed An Ideal Husband and H.M.S. Pinafore. Two seasons at the Shaw Festival directing The Twelve Pound Look and The Yalta Game (Director’s Project). Other directing credits include: Elegies and A Man of No Importance– The Musical Stage Company, Dream A Little Dream – The Grand Theatre.

The composers, lyricists and bookwriters that comprise the second edition of LAUNCH PAD will work in teams to create original one-act musicals inspired by the short stories of acclaimed Canadian authors and take their musicals through a full developmental process over the next 10 months. The triptych of new works will debut in winter 2020.

Ticket information for the winter 2020 production will be announced in fall 2020.

The Musical Stage Company is indispensable J. Kelly Nestruck, The Globe and Mail