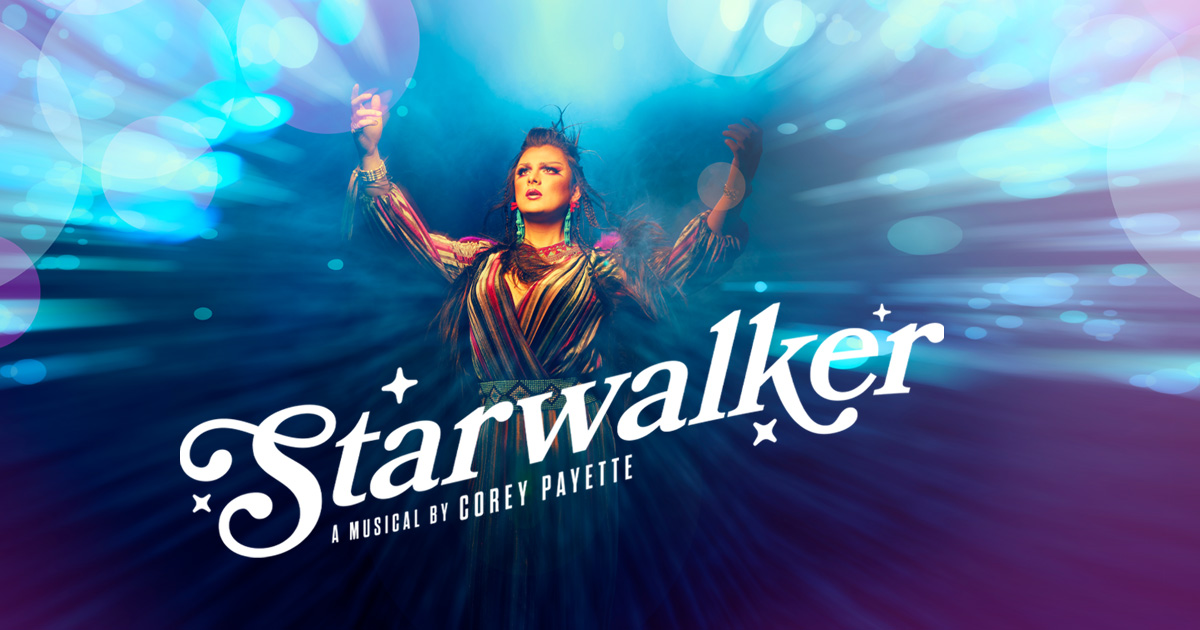 A 2-spirit Indigi-queer Drag Queen fuses Indigenous and Drag cultures giving life to a new style of performance we never knew we needed. The story follows Starwalker, an Indigi-Queer two-spirit drag queen learning the ropes of the Drag community when their world is thrown upside down. It is a love story, facing issues of identity, strength, and resilience.

After being commissioned by The Musical Stage Company and The Aubrey & Marla Dan Fund for New Musicals, Corey is working towards completing the first full production which will be announced this fall!

STARWALKER is being developed by The Musical Stage Company, Urban Ink, Raven Theatre, and The Cultch.

Commissioned by The Musical Stage Company with funding by the Aubrey & Marla Dan Fund for New Musicals.

Corey Payette is proud of his Oji-Cree heritage from Northern Ontario, and has worked across Canada as a playwright, actor, composer, and director. He is the Artistic Director of Urban Ink (Vancouver, BC), past Artist-in-Residence with English Theatre at Canada’s National Arts Centre, and the founder of Raven Theatre (Vancouver, BC), focusing on new works by Indigenous artists. Corey has worked as an Artistic Associate with Full Circle: First Nations’ Performance and The Indigenous Cycle at the National Arts Centre, an investigation into the broad spectrum of the Indigenous body of work being created on Turtle Island. This cycle resulted in the creation of a new department of Indigenous Theatre at the National Arts Centre, which launched its inaugural season in 2019.

As a theatre creator, his original musical Children of God (book/music/lyrics & direction) was developed through the Collaborations in English Theatre at the National Arts Centre, Vancouver Playhouse, Firehall Arts Centre, Western Canada Theatre, Arts Club Theatre, Urban Ink, Full Circle: First Nations Performance, and Raven Theatre. Children of God had its world premiere in 2017 at the York Theatre (The Cultch), followed by a tour to the Mainstage at the National Arts Centre in Ottawa, the Citadel Theatre in Edmonton, Western Canada Theatre in Kamloops, the Segal Centre in Montreal, a return engagement at the York Theatre in Vancouver, followed by a three week tour of Southern British Columbia. The Royal Manitoba Theatre Centre has announced Children of God in their upcoming season to take place Feb 18-March 13, 2021 in Winnipeg.

His second musical Les Filles du Roi (music & direction, with co-book/lyrics with Julie McIsaac) was written in English, French, and Kanien’kéha (Mohawk) and had its world premiere in 2018 in Vancouver at the York Theatre (The Cultch), commissioned by Fugue Theatre and produced by Fugue, Raven Theatre, Urban Ink and The Cultch. Sedna (music composition & direction, co-created with Reneltta Arluk and Marshall McMahen) had its world premiere at Caravan Farm Theatre, co-produced with Urban Ink. His next musicals have been commissioned from Bard on the Beach, Musical Stage Company, and the Stratford Festival.

Acting credits include the world premiere of the musical The Road Forward by Marie Clements at the PuSh Festival, also the docu-feature produced by the National Film Board of Canada; Beyond Eden at Theatre Calgary/Vancouver Playhouse Theatre Company; La Cage Aux Folles at the Vancouver Playhouse; three seasons at the Chemainus Theatre Festival; and a tour of the Yukon with Gwaandak Theatre as the lead in the world premiere of Justice at the Yukon Arts Centre, also presented at the NAC’s Northern Scene Festival.

Corey holds a B.F.A. in Music Composition from York University, and composed the film score to the documentary AMIN AMIR (OMNI TV). He has been nominated for awards across Canada for his work and has won won the Canada Council’s John Hirsch Prize, 2 Jessie Awards, and 2 Ovation Awards. He is the past Grand Chief of the Board of Directors of the Indigenous Performing Arts Alliance (IPAA) and past board member of Vancouver Native Health Society providing mental, physical, and spiritual relief to Aboriginal people on the DTES (Vancouver, BC). His album The Music from Children of God, The Music from Les Filles du Roi, the published scripts, and the piano/vocal songbook are available on the shop tab, iTunes, and Spotify.

Corey lives on the unceded territories of the xʷməθkʷəy̓əm (Musqueam), Skwxwú7mesh (Squamish), and səl’ilwətaɁɬ (Tsleil-Waututh) peoples and acknowledges their Elders past and future as caretakers of this beautiful land.

For more information regarding the world premier of STARWALKER, visit The Cultch website here.