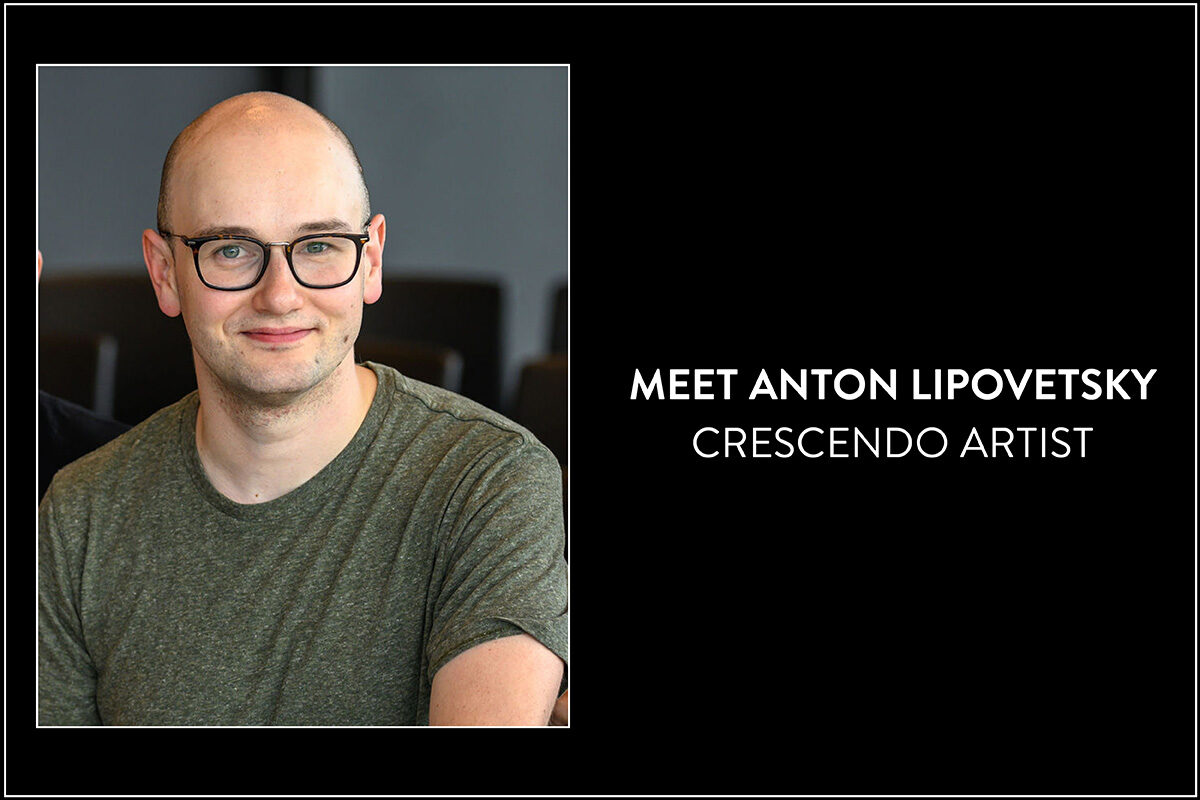 This week, we’re thrilled to be speaking with Anton Lipovetsky, The Musical Stage Company’s newest Crescendo Series artist. You may recognize Anton as the composer and lyricist of CYGNUS, which he wrote alongside bookwriter Steven Gallagher as part of REPRINT in summer 2019, which formed the basis for BLACKOUT, which is part of our 2020-21 season. Over the next three years, Anton will receive a $30,000 bursary, dramaturgical support, international advocacy and promotion, and a commitment for full productions of two of his musicals. We sat down with him to talk about where his love for musical theatre began and what he’s most excited for as he begins his Crescendo Series.

How did you get involved in musical theatre?

My first experience with musical theatre was probably my mom traumatizing me with LITTLE SHOP OF HORRORS on video. I’m pretty sure I watched it front to back at least twenty times. Next was THE LION KING, which I also wore out on VHS. When I got older, I was lucky enough to go to a high school with an amazing theatre department (shout out to Mr. Nicks and Mr. Beharry!) and got cast in the classic musicals they put on each year like SOUTH PACIFIC, OKLAHOMA and THE MUSIC MAN. We performed in a 600-seat auditorium with a full student orchestra, and I remember really marvelling at the beauty of those old shows.

How did you get involved with writing musical theatre?

I’ve written songs since I was a kid and played in bands when I was a teenager, but I never considered writing a musical until I got to theatre school. I went to Studio 58 in Vancouver and our Artistic Director, Kathryn Shaw, heard me and my classmate Ben Elliott performing some silly song on the piano and asked us to write something for the student play festival. That turned into THE PARK (written with Ben and our other classmate Hannah Johnson). When we expanded it into a full-length musical to be produced on the school’s mainstage, I found the process unbelievably exhilarating, and I was hooked.

Because I find it too hard to pick just one, I’m going to ramble off a few I love for different reasons. One musical that’s very close to my heart is SUNDAY IN THE PARK WITH GEORGE. It’s a moving exploration of what it’s like to be an artist and I think there’s genius in the way the score and lyrics are constructed. Another musical that often comes to mind as a favourite is the dated but infectious LEGALLY BLONDE–I’ve probably listened to that soundtrack more than any other. A musical I think is underrated is the movie musical SOUTH PARK: BIGGER LONGER UNCUT. The musical soundtrack I have on repeat right now is A STRANGE LOOPwhich if you have not heard, you must!

How would you describe your musical writing style?

I think I’d describe my musical theatre writing in general as folk-influenced-pop-for-actors, but I try to find something more musically specific for each new score.

You have a variety of projects in the pipeline, does your creation process differ from piece to piece?

Yes, totally. Everyone works so differently. When I work with Ben, we jam our instruments with each other, and we have a very specific musical chemistry. Writing on my own involves many hours alone in headphones. When Steven Gallagher and I are writing together, we’re rarely in the same city, so we text and email each other all the time and he’s so generously available for a FaceTime call whenever to listen to me say “Steven, help me, why can’t I make this work?!”

A process that differs from all of the above is creating COWBOY TEMPEST CABARET, a musical that I’m working on with Vancouver artists Lucy McNulty and Niall McNeil. We generate material for that show almost entirely in a room together through improvisation. Niall, whose life experience includes Down Syndrome, is the head writer and lyricist and he writes in a gorgeously specific and poetic idiom. I capture what he says or sings verbatim and try to preserve it as much as possible while still exploring lyrical structure and rhymes.

What are you most excited about in joining The Musical Stage Company as our newest Crescendo Artist?

I feel so lucky to be able to focus on writing more than ever before. I hope I can get out some ideas that have always been somewhere in the back of my head but that I’ve never had time to explore.

What was your favourite part of working on your piece CYGNUS (presented as part of REPRINT last summer) as a writer in the Launch Pad program?

I have to say getting to meet and work with all the amazing and dedicated people who worked on Launch Pad–creative teams, crew, cast, mentors, staff. I learned so much from our director Ann Hodges and our musical director Wayne Gwillim, who are both absolute experts at what they do. Michael De Rose and Brandon Antonio, our actors, were wonderful in their roles and brought the show to life. And collaborating with Steven [Gallagher] as a playwright was an absolute dream!

Getting to see the show on my day off from performing was fun. I was performing six nights a week at Bard on the Beach here in Vancouver, so I had one day to make it from Vancouver to Toronto and back. It all worked out!

How would you describe the current state of Canadian musical theatre?

There are so many talented people in this country, and amazing work will happen when it is safe to happen. I feel sure of that. I’m optimistic that this current time away from stages will lead to meaningful development in our industry, both artistically and socially. But this is a trying time for people who make their living off being in a room with other people. The isolation and uncertainty is very hard.