Skip to content
HOME › Musical Notes › Local News › Come From Away, From Sheridan to Broadway 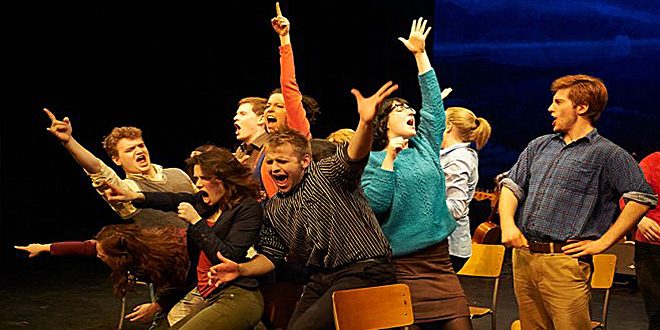 “You are here, at the start of a moment.” This is a lyric from the new Broadway-bound Canadian musical, Come From Away, written by composing duo (and husband and wife) David Hein and Irene Sankoff. With the show’s opening at Mirvish being just two weeks away, and with their Broadway opening at the Gerald Schoenfeld Theater just a few months away, this lyric seems very appropriate. It’s an incredibly exciting time for Canadian musical theatre, and it feels like this is just the beginning for the heartfelt and moving new musical. However, the true beginning of Come From Away can be traced back to 2011, when the show first began development at Sheridan College in Oakville, Ontario.

In the spring of 2011, Associate Dean of Sheridan College Michael Rubinoff was about to launch the Canadian Music Theatre Project, Canada’s first incubator for the development of new Canadian musicals. He had also been reading a number of articles about the incredible events that took place in Gander, Newfoundland on September 11, 2001. He immediately knew that this was a story that needed to be told on a much larger scale. Feeling that the most compelling way to tell the story was to use the medium of musical theatre, he approached a number of Canadian composers about writing the musical, most of whom said he was crazy for wanting to create a musical about 9/11. After seeing David Hein and Irene Sankoff’s new show, My Mother’s Lesbian Jewish Wiccan Wedding, at Mirvish’s Panasonic Theatre, he wrote to them about writing what was then the untitled musical. After much deliberation, Sankoff and Hein agreed to write the show. They spent three weeks in Gander conducting research and interviews and then began writing what was soon to become Come From Away. The following spring, they had finished the first act, which was staged as a workshop presentation in one of the studios at Sheridan. After receiving rave reviews, it was announced that the full show would be staged as part of Sheridan’s 2012/13 season.

Having seen (and sobbed through) the first act of Come From Away the previous year, I had high hopes when I heard that the show was being produced with both acts for our graduating class, and that I would have the chance to audition. You could tell that the musical was still very much in development during the auditions, as some of the scenes we were given to read had been written as recently as that morning! In the end, fourteen of us were lucky enough to be cast in the show, after many auditions featuring our highly questionable Newfoundland accents. When we started rehearsals a couple of months later, even though most of us had seen the first act, we really had no idea what to expect. Sitting in the studio theatre at Sheridan, listening to David Hein play through rough drafts of new songs on his guitar, we all began to realize how truly special this experience was going to be. We spent hours sitting around tables, discussing the script and working with Irene and David to help them in figuring out what worked and what didn’t. There were songs, scenes, and even characters that were cut from the show during the process. What remained was a two hour, two act version of the show that was staged with precision by our incomparable director, Brian Hill. The live folk band was on stage with us, and our ‘set’ simply consisted of 14 church basement chairs that were transported around the stage to create everything from an airplane halted on the runway to the local pub, where the infamous Newfoundland screech-in took place. We opened in February, 2013, and almost immediately the show had sold out, and Dave and Irene were already figuring out what the next step was for Come From Away.

Two weeks ago, I had the incredible opportunity to fly to Gander, Newfoundland, where the Broadway cast was about to stage a concert version of Come From Away for pretty much the entire town. The local hockey arena had been converted into a concert venue that could sit over 2500 people. Both the matinee and evening performances were completely sold out, with all proceeds being donated to local charitable organizations in Gander and the surrounding area. In the minutes leading up to the start of the show, the excitement in the arena was palpable. It was such a thrill watching the citizens of Gander, most of whom were there when the actual events took place, getting ready to watch a musical about themselves set in their hometown.

As soon as the lights went down, the crowd roared, and after a wonderful speech from the writers, the show began. The next 100 minutes can only be described as magical. Everyone in the audience was on the edge of their seats, cycling between laughter and tears throughout the show. By the beginning of the finale, the entire audience was standing and applauding even though the show wasn’t over yet. At this point, most of the audience and the cast onstage were in tears. Many of the people portrayed in the musical were actually in attendance at the show, including Captain Beverley Bass, Kevin Tuerff, Beulah Cooper, and of course, Mayor Claude Elliott, who got up onstage and danced with the cast in the final number.

I can’t even begin to describe what an honour it was to be a part of the creation of this new musical. Seeing the success of the show and the profound effect that it has had on everyone who has seen it is literally a dream come true. Come From Away will join just a handful of Canadian musicals ever to be produced on Broadway, but the show is so much more than just a musical. It is a cultural ambassador for Canada all around the world. It is a message that love and human kindness will always trump fear and evil. It is concrete evidence that even in the darkest and most tragic of times, there is always hope.