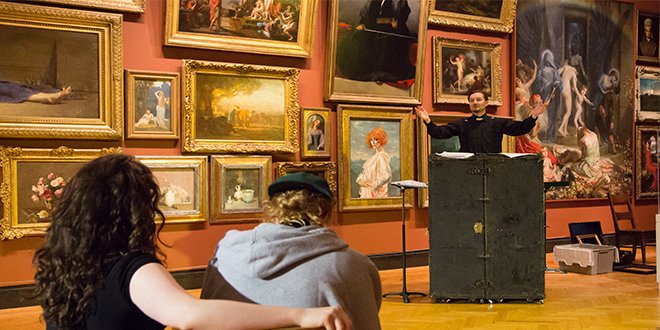 What I Learned From Reframed

Last week, a crazy idea that began 18 months ago came to fruition as we performed three new musicals, inspired by paintings in the permanent collection at the AGO, in the gallery where the works are hung.

Three teams of exceptional writers – Britta Johnson & Sara Farb, Julie Tepperman & Kevin Wong, and Erin Shields & Bryce Kulak – each chose a painting that inspired them in The Fudger Gallery last September, and set out to write a 20-minute musical. In December we did a reading of the first draft of the works with our phenomenal three actors (Kaylee Harwood, Tim Funnell and Eliza-Jane Scott), followed by a reading of the second draft in February. Following a brief rehearsal period, we presented staged presentations of these new musicals over 8 performances in the Art Gallery.

For me personally, the show was an utter thrill and a very exciting way to share the first original commissions from Acting Up Stage Company with our audience.

While the riches were plentiful, here is what most stands out for me as I reflect on this wonderful experience:

Thank to our partners at the Art Gallery of Ontario for collaborating on this project, and to Yonge Street Theatricals who produced it in association. So what’s next? Stay tuned! But needless to say, I’m particularly inspired by what transpired and excited to develop next steps and possibilities.