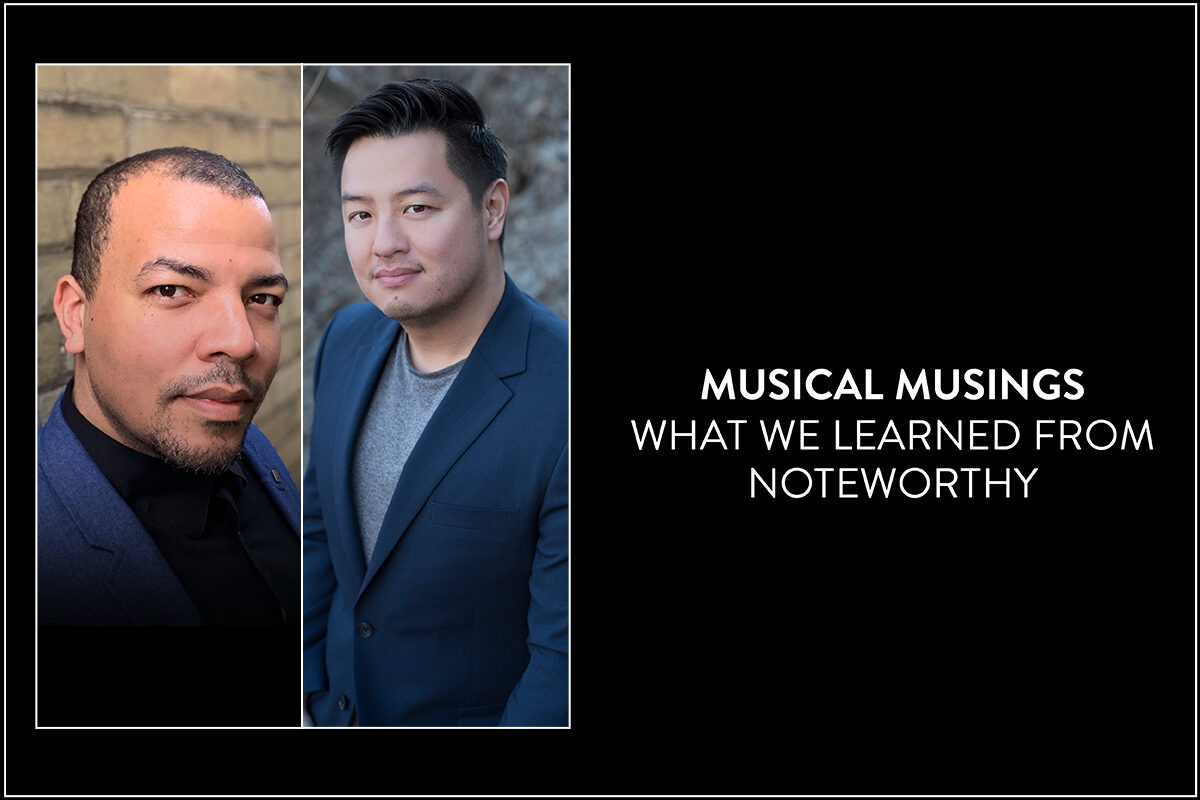 What We Learned From NoteWorthy

We sat down with NoteWorthy co-facilitators, Kevin Wong and Ray Hogg, to learn more about our flagship musical theatre writing program and the key learnings that were discovered during our first nationwide program that was offered to the largest cohort in our organizational history.

Offered bi-annually, NoteWorthy allows composers, lyricists, and playwrights from across Canada to build foundational skills through master classes and guided collaborative writing assignments. To help ensure that the future of musical theatre better represents a diverse range of stories and voices, the 2020-2021 NoteWorthy program exclusively supports BIPOC artists from across Canada.

Ray Hogg: Working digitally has brought us both surprising challenges and remarkable gifts.  I’m sure our readers can guess at the challenges:

The biggest challenge I found was setting the tone or mood for the room.  Because we were more than 25 people in the zoom room at the same time we had all of the participants on mute at almost all times.  This made it very difficult to “read” the room.  I found myself asking “are the participants engaged?” “did that comment resonate?”  Thankfully our 24 artists were adept at using the chat function, and so all of the cues that I would look for to gauge a room’s interest could be found and read in the chat (which our participants use enthusiastically!).

Kevin Wong: Zoom’s screen-sharing and audio-sharing features became integral to our sharing processes. Writers used them to share demo tracks-in-progress, as well as share in-progress script documents with the cohort. We could do a digital table read on Zoom across the country for a script that had just been edited seconds before! It also used a great deal less paper than we’ve historically used in Noteworthy (and in pre-Zoom workshops).

Ray Hogg: Related to working digitally was our ability to work with BIPOC artists who live across Canada.  Our participants ranged from British Columbia, Alberta, Manitoba, Ontario, Quebec, and Nova Scotia.

Working in this way has given us a broader scope of the work that is happening in artistic communities from coast-to-coast. Not only was our internal awareness raised, but we also were able to create working relationships between artists who would ordinarily not cross paths.

Kevin Wong: We did discover that an 11:00 AM start time in Toronto means some brutally early start times for our poor West Coast-based cohort members! Shoutouts to Renae Morriseau who never once complained despite having to wake up at 6:00 AM and to Makram Ayache, who was often up at 7:00 AM his time and did many of our sessions while on a stationary bike.

Ray Hogg: There is a phenomenon known as code-switching that many people of color endure/employ.  As explained in a Harvard Business Review article: “…code-switching involves adjusting one’s style of speech, appearance, behavior, and expression in ways that will optimize the comfort of others in exchange for fair treatment, quality service, and employment opportunities.”

As one can imagine, the psychological effort of maintaining speech, behaviour and appearance while also striving for the “openness” that the creative process demands is nearly impossible.  By placing artists in an environment where code-switching was taken off of the table, we freed our 24 artists to be authentically themselves in their creative endeavours.  The result of this can be summed up in a discovery that Black Tony-Award-winning theatre-maker Stew made along with our participants during his masterclass: “In becoming hyper-specific your work has become universal.“

Kevin Wong: A lot of ‘traditional’ musical theatre training spaces have often prioritized Western European styles of composition and notation above many others. This has, in many spaces, alienated and marginalized many genres and cultural styles of narrative musical composition which don’t lend themselves well to that kind of methodological funnel.

In addition to bringing BIPOC artists into a space together, it was imperative that we allow for more diverse processes of music creation (rather than expecting everyone to conform to the strictures of handing in piano/vocal scores). The intention of this was for our cohort’s composers to be more empowered to bring their full selves, identities, influences, and styles to the musical theatre they were creating.

This better allowed for musical creation that represented the full cultural plurality of our cohort, from multi-tracked acapella vocal stacks, rap over looped beats, polyrhythmic experimentation, or electric guitar-driven anime-theme-song-esque J-Rock influences (and much much more). My mind was blown by the creativity of our cohort on a weekly basis!

Ray Hogg: I’m really interested in creating long arcs of engagement between The Musical Stage Company and the 24 artists that we selected for this season’s NoteWorthy program.  A very exciting tangible next steps is:

a) A series of 12 video-blogs featuring a short introduction to each artist and a sample of the work they recently crafted as a part of NoteWorthy that they feel best represents them as a music theatre writer or composer.  Think Song Exploder meets The Musical Stage Company.

b) A Noteworthy reunion hosted by our partners at Prime Mover Theatre Company, and featuring a lecture by guest speaker Alex Lacamoire (who many of our readers who are HAMILTON fans will recognize as the co-arranger along with Lin-Manuel Miranda, of the original Broadway production, and is currently the worldwide music supervisor).   Mr. Lacamoire will offer a private session to all of our BIPOC Noteworthy alumni as well as a public session for all who are interested.  Click here for more details.