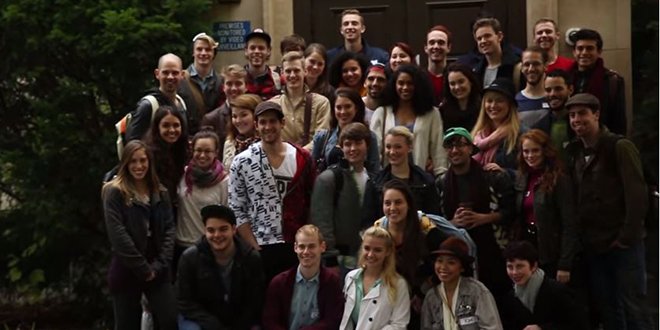 10 Reasons the new musical Brantwood is a knockout

Here are 10 reasons why this is a must-see show (one for each decade of the school’s history).

The show is inspired by the real Brantwood Public School, in which the show takes place. It was built in 1920, and was recently closed in order to be turned into a condo building – just like the fictional Brantwood in the musical.

Each member of the audience is outfitted in a bright blue robe and take on the role of Brantwood alumni, reuniting for a final celebration of the school before it shuts down for good. (These robes also play an instrumental role in distinguishing the actors from other audience members.)

The whole school is made up in mind-blowing detail – each paper in the administration office has a purpose, each room has a personality. And there’s much more to it than the simple map you’re given at the start would suggest.

As audience members explore the school, they can pick and choose characters to follow throughout their story. Or, they can wander on their own and stumble upon scenes as they’re already unfolding. It’s impossible to see everything in one go, so it’s best to relax and just go with your gut.

With so many audience members filling the school (about 200), don’t expect to have much alone time in Brantwood. But if you happen to be in the right place at the right time, you could be pulled into a very private moment with a character.

These Sheridan College students are super talented and energetic, and superb guides through the trials and tribulations of high school. For an audience, this show triggers memories of our own adolescence (and the universality of coming-of-age stories), and there’s no better way to relive them than through those who experienced it not that long ago.

The music in Brantwood is sometimes as inventive as the form itself. From a student musical chronicling the death of another student from years past, to another song using a typewriter to talk about gender inequality in school, to a fun and weird grand finale, the original music for this show is memorable.

Cushman and Tepperman use ten decades to tackle universal issues relevant to youth: love, sex, friendship, homosexuality, bullying, abuse, and more. There are also some quite large subjects particular to the time period in which they take place, like racism, sexism, and antisemitism. Then there are some issues that are just plain dark, like murder, ghosts, and the supernatural. This is one unique script.

Probably the most astounding thing about Brantwood is how seamless it is. 200 people are moved from Sheridan to the school by bus every night. Lighting and music cues go off without a hitch. Characters appear and exit at very precise moments. and yet, you hardly ever feel like there’s an organized, structured play going on. These stage managers deserve medals.

Unlike most theatregoing experiences, Brantwood forgoes the distance between actors and audience, the traditional theatre space, and the straightforward unfolding of a live performance. This is a trend that’s already proven popular in New York City and London, England, but it’s most likely the biggest, most ambitious example that the GTA has ever seen. And it’s a very exciting moment in Toronto theatre.