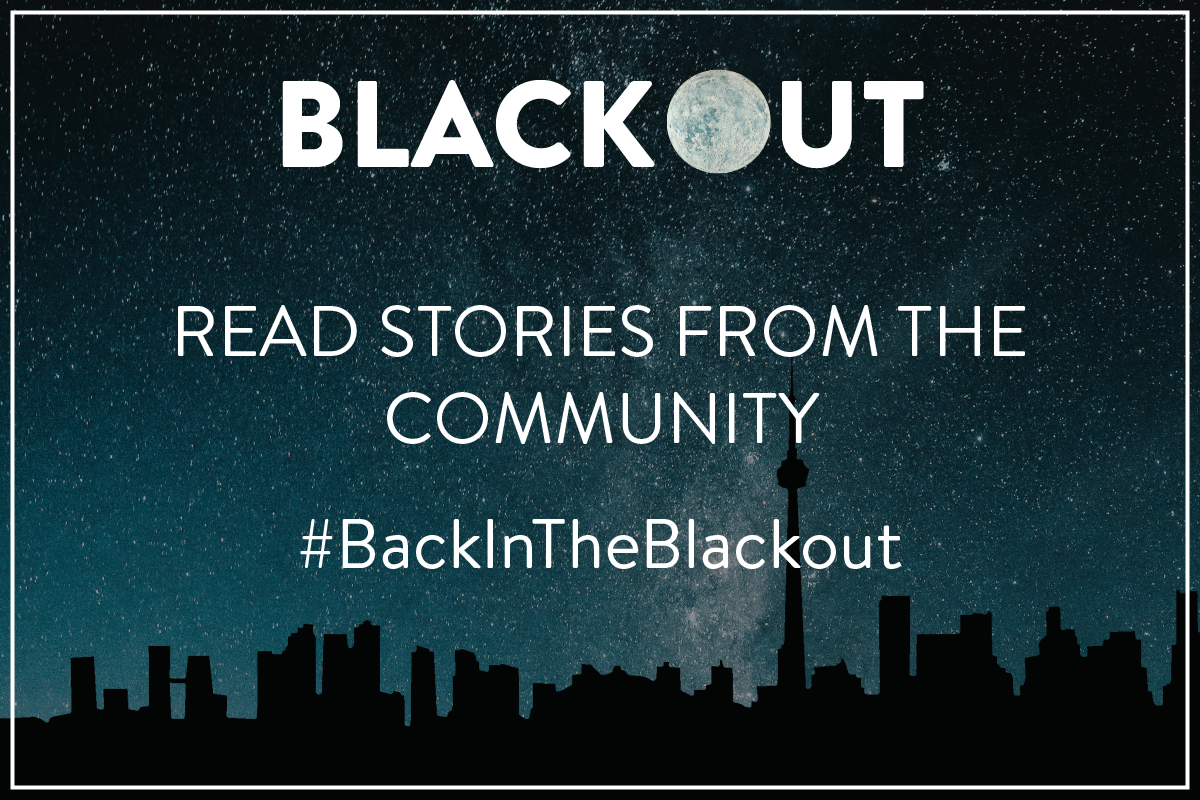 #BackInTheBlackout: Read Stories from the Community

A few weeks ago, during the opening week of our incredible preview production, BLACKOUT, we reached out to you; our community and audience, to learn more about what you were up to during the famous blackout of 2003! We were overwhelmed with the submissions we received, and filled with such a sense of love and camaraderie, reading through them. So here we are; highlighting some of the fun and enchanting stories you’ve shared with us!

We hope these bring you as much laughter and joy as they brought us, and we can take this opportunity to reconnect and bond with others, as we take a lesson from BLACKOUT, and find the light in moving forward together.

“I was saving up for college by working as a landscaper for a graphic designer, and performing at night as part of the young company at the Stirling Festival Theatre. I had very recently gotten my driver’s license, and was driving myself around in our family’s GIANT GMC van.

I was exhausted, working myself to the bone, and on the day of the blackout, as I pulled out of my landscaping job on a narrow back road, a large bumble bee flew in my window. Not wanting to get stung, I very casually (and I thought very quickly) reached down, got a kleenex, and ushered the bee out the window. As I looked back up, I was in the ditch, barrelling towards a hydro pole. I managed to perfectly park the giant van between the pole and the guide-wire, smashing off both rearview mirrors, but otherwise not damaging the vehicle in the least.

A neighbour quickly rushed over, turned off the van and brought my shocked young self inside to call my parents and wipe the blood from the mirror off my exposed arms. In the time between me wedging the van in and my parents and the tow truck arriving, the power went out. We all assumed that my little fender bender had caused a local blackout.

We proceeded to drive to the theatre for my show that night in a world pre-cell phone. When we arrived, we discovered that the theatre over an hour away also had no power. As we drove home listening to the local news radio, I operated under the assumption for the rest of that evening and a very restless sleep that I caused a massive blackout by driving my van into a hydro pole, and all my friends were going to be mad at me because I got our regional performance of Anne of Green Gables cancelled that evening.

To this day it is my only at-fault accident, and until March of 2020, one of the only times I was in a show that had to cancel performances.”

“I will never forget this – I was in Nova Scotia doing a teen production of Les Mis. The musical director/conductor and his partner who played the trombone in the orchestra were in Toronto for a wedding on our dark days and had to stay!!! The violinist had to conduct an act and he cried 😂 poor man!”

“My partner’s uncle had a medical appointment which I’d agreed to take him to, as he didn’t drive. I picked him and his wife up and brought them home for dinner ahead of the appointment time.

The blackout struck during dinner preparations. Luckily, between an outdoor barbeque and a gas stove indoors (which we could light with a match), everyone was well fed. Then I drove Aunt and Uncle downtown.

The stars were amazing, as we could see more of them than ever before. It was the weirdest sight, with all the street lights out, the whole city in darkness.

Driving along the Gardiner was surreal. We arrived safely at the hospital, and I dropped them off. With back-up generators running, the hospital was operating pretty much as usual, and the procedure went well.”

“I walked down 40 flights of stairs to get to the ground floor of my office, then I walked from Bay & King to Yonge & Finch in heels. After that, I kept shoes at work and wore either running shoes or Birkenstocks into the office. #blisters“

“I was a teenager working at a golf course, and we ‘had to’ drink all the beer in the fridge to keep it from going bad!!!”

“I remember more than anything the taste of sardine. I was twelve years old at the time at my old house in a very typical suburban area. I was in the pool on that hot summer day when suddenly the jet turned off.

My parents asked us to get out of the pool and we all went around to the front and it became apparent to my parents that we were in a blackout. The food in our fridge was out. We had no idea for how long and it was getting close to dinner time.

As we scrambled to figure out what to eat it became there was only viable choice. The sardines in the cold cellar. It was all that was left and the sound for the next half hour was tin being pulled back and the mushy flesh of salty sardines being pierced.

Now I like sardines but there is a limit and on that hot day of the 2003 blackout, I discovered what that limit was.”

“In the family room with my family all huddled around my Barbie radio! (The only radio in the house that ran on batteries 😂 )”

“I was 20, home from college for the summer and had never ever thrown a party in my parents home before. I did the night before the blackout; a group of 10 and I really tried to be somewhat responsible.

The next day I awoke hungover and noticed the stereo didn’t work…I was convinced I somehow busted in the previous night. Hours later without having ever used any power my Dad pulled into the driveway and announced the blackout. I had no idea!!!”

“I remember being out in suburbia as a kid, and the first thing we checked when the power went out was our freezer and fridge. Of course, with my wise, eight-year-old advice, we ate all the fudgesicles first. We were really lucky to have a BBQ, so we spent the next three days (power took longer to come back to us outside the city) grilling everything, and invited family friends to stay with us and play Disney edition monopoly. My brothers and I learned just how ruthless our mom was when it came to that game, and she beat us every time

That time may have been the closest we’d felt in years. It felt nice to have us all unplugged from work calls and tv or video games.”

#BackInTheBlackout is just one of the ways we at The Musical Stage Company want to share our love of this community and city with you. On the 18 year anniversary of the 2003 blackout, we hope to continue sharing stories like these and will continue to be inspired by this community always finding the light in the darkness.

Learn more about BLACKOUT (the show) by clicking here.