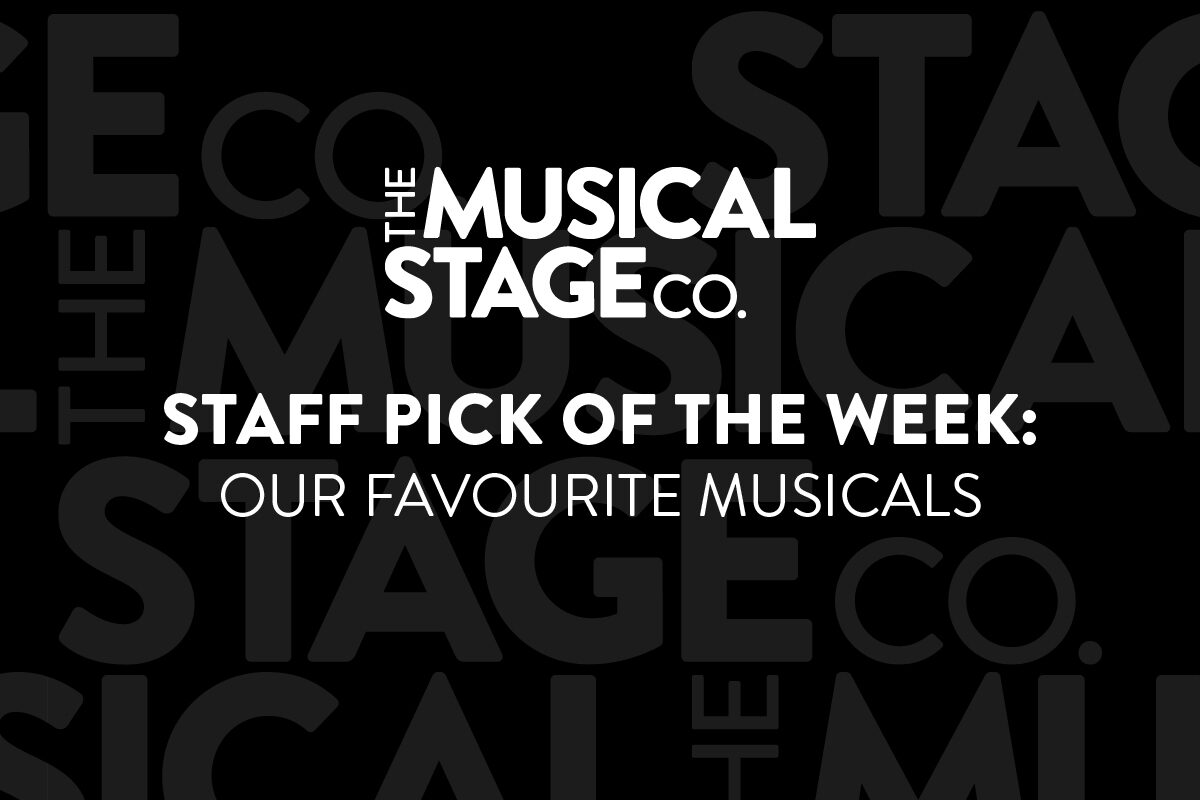 Posted on November 8, 2021
by Cameron Vindua

Welcome to our newest blog series; Staff Pick of the Week! Fall is properly here in Tkaronto, and as the leaves turn red and morning frost settles in with the cold weather, we’re cozying up at home and enjoying some of our team’s favourite things about musical theatre. This week we sat down together and discussed our favourite musicals and how we want to share that enjoyment with all of you – our incredible audience and community. Read more below and see if you can spot your fave as well!

“In 2013, I sat at the Public Theatre to watch the off-Broadway production of FUN HOME and my heart was in my throat for 100 minutes. It was the most ravishing example of musical storytelling that I had ever witnessed with a score that captured the complex, internal world of its characters in every note. I knew that somewhere in my life I had to be involved in it, and my dream came true in 2018 when we produced its Toronto premiere in a production presented by Mirvish Productions.”

“The search for identity and the protagonists exploration of Blackness are really resonating with me these days. I think the semi-autobiographical nature is also massively appealing to me – knowing more about artists is lending real depth and weight to my listening experience!”

Favourite Song from PASSING STRANGE: ‘Work the Wound’ is a double play song – I always go back and listen to it a second time.

“I’m a sucker for 1970’s musicals and orchestrations. It harbours this really beautiful, complex inner life under a cool exterior and the more I listen to it the more I hear.  It examines the terror and exhilaration of letting people in, being vulnerable and the overall human experience and it just clicks with me.”

Favourite Song from COMPANY: ‘Marry Me A Little’

“This production has a special place in my heart as it was my first gig with The Musical Stage Company (then known as Acting Up Stage!) back in 2012. The score is mesmerizing and so smart, and the book digs really, really deep. I’m always finding new ways to experience the story every time I listen to the cast album.”

Favourite Song from CAROLINE, OR CHANGE: ‘Lot’s Wife’ – duh! The best “I want” song of all time!

“I love a dark musical, especially right after Halloween. My fave musical changes week-to-week, but I always go back to either SWEENEY TODD or NEXT TO NORMAL. There is nothing quite like a Sondheim musical; such complex musical scores and meaty characters. I love the Beggar Woman, her character arc gets me every time – which is why I love ‘Joanna (Reprise)’! Also, the OBC is such an incredible cast (especially with London, Ontario’s Victor Garber as Anthony)!

Robyn’s Pick: SUNDAY IN THE PARK WITH GEORGE

“On the surface this musical is about an artist trying to find their voice and reconcile their life with their art, but once you’re on your 2nd or 3rd listen you can feel how the themes are much more universal and how it can still resonate today. The musical tells us about how to sustain (and sometimes lose) relationships, juggling those relationships with careers, making a career with your art, balancing art and commerce, integrating art with technology, and more – all which feel very topical even to a 2021 audience.”

Favourite Song from SUNDAY IN THE PARK: ‘Finishing the Hat’ is the song that always sticks with me. It shows us how the whole world can fall away while an artist is all consumed by their desire to create, with the closing line being “look I made a hat, where there never was a hat”

Alethea’s Pick: CRAZY FOR YOU

“To me, it’s a crucial part of musical theatre history: at a time when Broadway was being dominated by British mega-musicals like LES MISERABLES, MISS SAIGON, and PHANTOM OF THE OPERA, Susan Stroman brought storytelling through dance back to Broadway with CRAZY FOR YOU. Stroman’s impact with CRAZY FOR YOU can’t be understated: numbers ‘Slap That Bass’ and ‘I Got Rhythm’ are still iconic and restaged today, and you can draw a direct line between dance conventions first used in CRAZY FOR YOU and conventions that appear in the work of director/choreographers like Casey Nicholaw on shows like MEAN GIRLS today. Even beyond the show’s impact on musical theatre dance and the identity of the American musical, CRAZY FOR YOU is a beautiful show about a town being reborn when they are exposed to art.”

Favourite Song from CRAZY FOR YOU: ‘Could You Use Me?/Shall We Dance.’ At the beginning of the song, Polly and Bobby could not be more fundamentally different from one another, but by dancing with one another, by the end of the song – and without hardly even speaking – they are in love. Falling in love through dance is the emotional heart of the show and is the fundamental building block upon which the rest of the show sits, and it’s beautiful how much is shown in this number without language.

“CABARET was one of the first musicals I worked on after deciding to pursue stage management professionally (I still have the Hart House production plaque from 9 years ago), so it holds a special place in my heart. I fell in love with the music, the MC and the Kit Kat Girls in that order. The irreverent humour and dark glamour juxtaposed with a political backdrop of high stakes really opened my eyes and preconceptions on what musical theatre can be.”

Favourite Song from CABARET: ‘I Don’t Care Much‘

“I think coming from less of an involved theatre background, my biggest exposure to musicals and the queerness associated with it was movie adaptations and the occasional musical that made the paper, but HEDWIG & THE ANGRY INCH was one of my first glimpses into transness that wasn’t completely demonized and solidified identity as something real and fluid but emotional – that I could be queer and real and ALLOWED to express my anger, love and confusion about it all and more importantly, to exist out loud in a way that can and should be celebrated – in spite of society’s views on me.”

Favourite Song from HEDWIG: I will unabashedly choose ‘Origin of Love’ every time. Call me cliché or sentimental, but the idea of gender and bodies transcending time and origin – that we have always existed throughout history and in every belief. Celebrating love & belonging being sewn into the fibre of our very being has always cracked open my heart.

“CABARET became progressively more representative of pre-WWII Germany with each iteration of its production. CABARET premiered on Broadway just after The Eichmann Trial aired live on televisions across the world, Bob Fosse’s movie premiered three years after the Stonewall riots, and the UK & Broadway revivals premiered shortly after the fall of the Berlin wall. Each production was able to use the new waves of information and social commentary of the time to create as representative a piece as possible.”

Favourite Song from CABARET: ‘If You Could See Her’ to me one of the most evocative, political pieces in musical theatre history, with a rich history of its own evolution through different revivals of the production.

“I find it difficult to pick favourites, but one musical I would like to see live one day soon is HAMILTON. The musical style, storytelling and heart behind it I find incredibly exciting.”

Favourite Song from HAMILTON: ‘My Shot.’ To me it’s an anthem that speaks boldly about tenacity, grit and resilience – it’s enough to get me ready to face whatever is in front of me.

“My favourite musical of all time is FALSETTOS by William Finn and James Lapine. This musical has spoken to me as a queer person since I first saw Musical Stage’s production of it way back in 2013. The music is what really gets me as William Finn doesn’t make a whole lot of sense upon first listen, but then the more you hear it the more you notice the patterns and the words that purposefully trip over each other and it’s so naturalistic! It’s just like speech. It’s magic, I just love it so much. “

Favourite Song from FALSETTOS: My favourite songs in this show are a tie between ‘A Day in Falsettoland’ – because the lesbians are just pure joy – and ‘Unlikely Lovers’ because it cracks my heart open.

Stay tuned for updated on our team’s picks of the week to learn more about us and find new and exciting theatre choices to explore!