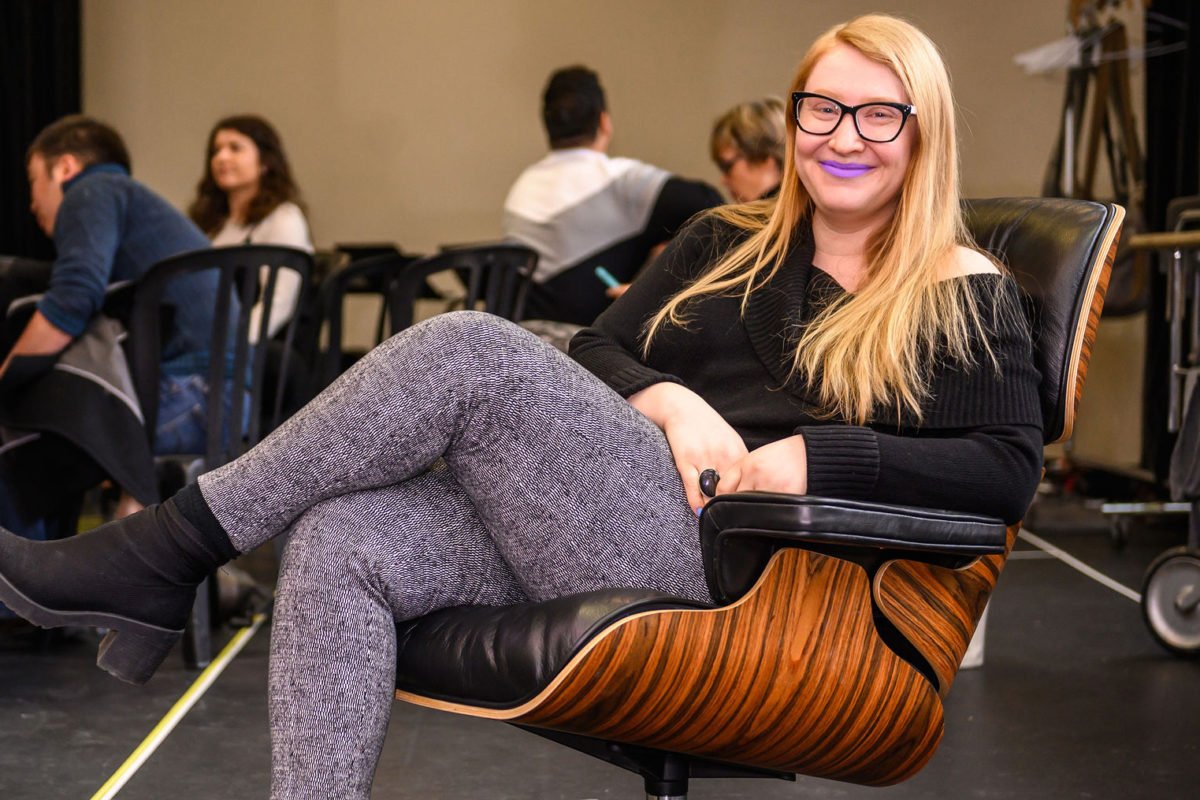 An Interview with Rielle Braid

We sat down with Rielle Braid, Rehearsal Doctor Madden, to discuss the rehearsal process for Next to Normal.

Rielle is playing the role of Doctor Madden in rehearsal while Louise Pitre finishes up the pre-Broadway run of Marie, Dancing Still at the 5th Avenue Theatre in Seattle. We spoke to Rielle about this unique rehearsal process and how she works to serve the entire production of Next to Normal.

What does your rehearsal process look like, with Louise Pitre stepping into rehearsals partway through?

It’s been quite similar to a process I might have had on another contract. I feel fortunate to be in the room, and I’m happy to help and be involved. I take detailed notes, and I try to be as prepared as possible so I’m not taking up too much space in the room. However, the entire team has been kind and warm and has encouraged me to have my own artistic process and fulfillment with this project. Philip Akin (Director) and Lily Ling (Music Director) have been encouraging and kind, and thus this is as smooth and productive as any process would be.

How do you ensure a smooth transition between yourself and Louise Pitre?

With the help of all! Seriously, with the notes I’m taking, and with the help of Sabryn Rock (RBC Apprentice Director) and David Terriault (Assistant to the Music Director & Conductor), it’s already become a group effort. This is a patient, smooth room, and everyone is taking detailed accounts and is very on their game. David helps keep record of any musical changes that need to be given to Louise, and Sabryn keeps an eye on the blocking and choreography, as well as the particular direction Philip Akin gives for this character. And our RBC Apprentice Production Manager, Jen Cooper, diligently focuses on all of Louise’s blocking notes. Thanks to their efforts, when Louise arrives, she has a group of people with all the answers she might need, including myself.

How is this rehearsal process different for you?

Because I’m not going on to perform the role, this is a very process oriented job. This is helpful for me because I tend to be result oriented. I can’t wait to get to a ‘finished’ place. But Philip believes that theatre is a living breathing thing, and therefore, it’s not going to be the same every day. Thus, making discoveries every day is important for a piece. For me, since I’m stepping out very soon, I’ve seen this all as an opportunity to be fully in the moment of the process. This means letting myself make mistakes, getting myself out of my head, and focusing on the text.

How is your experience different than being an understudy for a role?

In my past work with swinging and understudying, so much of my job has been to study other people and make sure I’m on my marks and as closely linked to their choices as possible, so that when I go on, there isn’t too much change for the other performers. It was a very technical and academic approach, at least when I did it. In this process, I’ve been working with everyone every day, so it’s sort of the opposite. I’ve had my own interpretation of the character. Things are going to be a little different [when Louise joins the rehearsal process] no matter what, but Philip’s direction and ideas, and my own ideas are going to be informative for the room when I leave. Every presence in an artistic process is part of the final product. 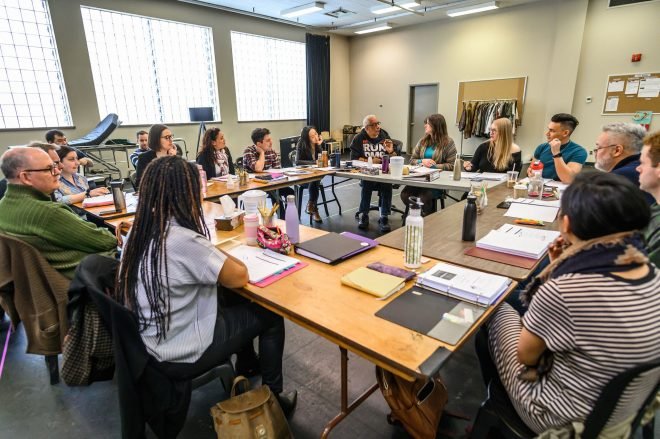 The company of NEXT TO NORMAL in rehearsal. Photo by Dahlia Katz.

What does the role of Dr. Madden mean to you?

I believe therapy and medication can save lives, and that mental health management and awareness is deeply important. I’ve been going to therapy for years, and I have an excellent therapist. Having a mental health professional represented in theatre is tremendous. I believe Madden represents hope for wellness, as well as the process of wellness. Mental health is a journey, and it’s never quite finished. Madden’s role gives hope to that journey.

Dr. Madden has traditionally been played by a man, do you think the piece changes with the role being played by a woman?

I think there could be a sort of patriarchal vibe to Madden, so when the role is played by a woman, it’s a different dynamic. But I also believe that every person inhabits their gender differently, so as a female-identifying person myself, my approach may be entirely different to another woman’s approach. What makes [this production] exciting and different is opening up the role to more than one gender. Because every time someone brings themselves to a role, the role develops and grows. There are a lot of different people in the world, and their truths are specific. Those truths enrich art and the world. Myself, I find I’m discovering an emotional investment in the character. She is deeply involved in helping Diana on her road to wellness, and Diana is maybe sticking with Madden longer than some other patients might.

Were you familiar with Next to Normal before you joined the project?

I knew the cast recording and the story, but that was about it. What struck me most about this piece is how in depth the portrayal is of how much mental health affects everyone. Say you don’t have depression, but your friend does, or your parent, or your sibling. [Mental illness] lives in your life, and has an effect on you. This isn’t talked about enough. People don’t always know how to help, or even how to ask. This show does a great job of telling us that it is difficult. That it’s okay that it’s uncomfortable. Talking about it and normalizing it helps.

You’ve been a part of several ensemble-driven pieces, from Ride the Cyclone to Dr. Silver. How does your experience working in that context serve your role in a piece like Next to Normal, which also has a small ensemble cast?

Being a part of a small ensemble in a musical is always the hardest work I do, and always the most rewarding. It uses every muscle. I’m never more physically or emotionally spent than when I’m in these small ensembles. I’ve been singing every harmony line and moving chairs since I was 21, so it’s territory I know. But that doesn’t mean it isn’t challenging. I think every performer should experience it, it’s an incredible way to get to know your instrument, and your company of players. It’s fulfilling as hell, and exhausting. I love it. 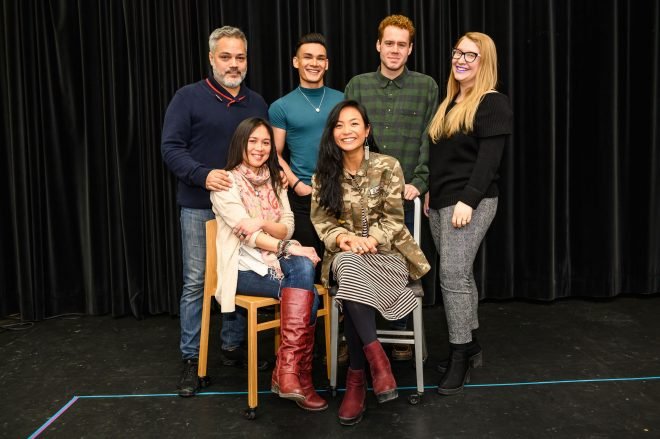 Next to Normal runs April 26 – May 19 at the CAA Theatre as part of the Off-Mirvish Series.
Tickets on sale now.