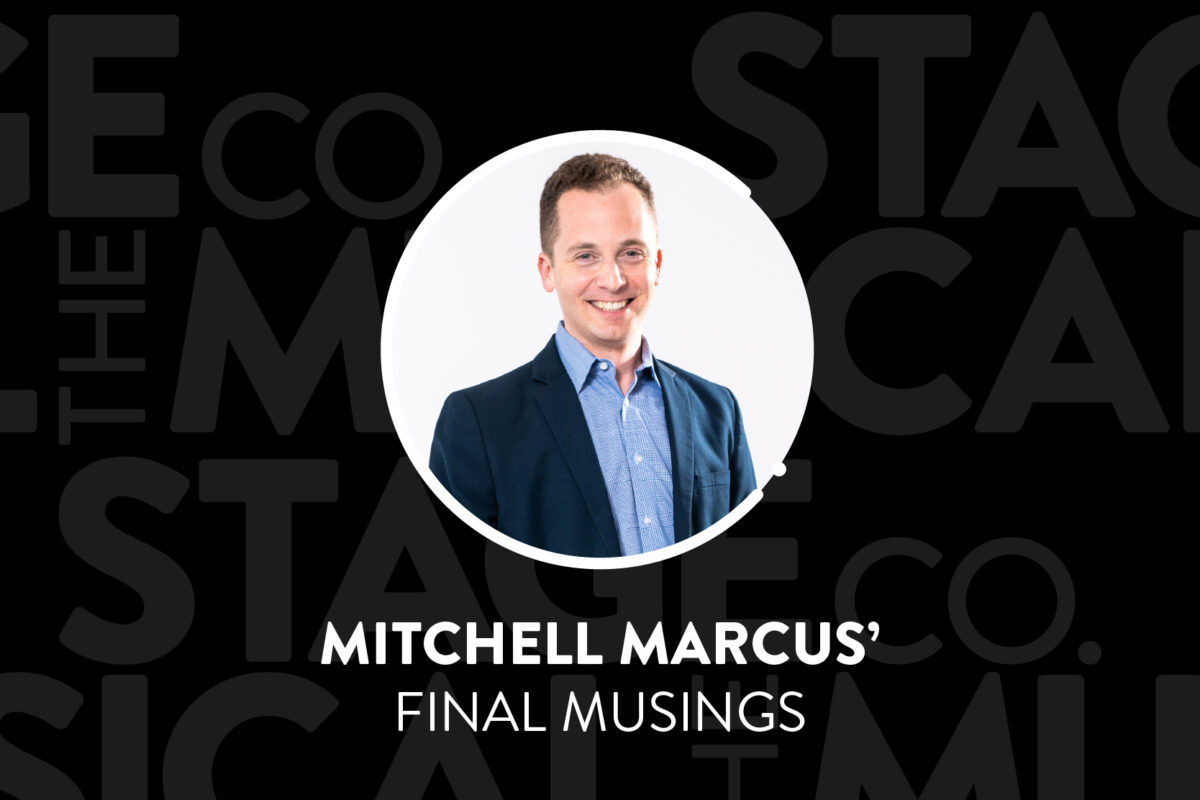 While I don’t consider myself terribly superstitious, I do find meaning in patterns, and the full-circle nature of these dates inspires me to reflect on a larger full-circle that has happened during this period of time.

I recently dug up a university project from April 2003 that I completed for an Arts Management class – which subsequently became the foundation for The Musical Stage Company. The assignment was to write a business plan for an arts organization, and mine was (unsurprisingly) a business plan for a musical theatre company in Toronto. In the Executive Summary I wrote:

We will enhance and enlarge the Toronto musical theatre scene with small and midsize shows that expose Canadian talent, and enrich the audience with the best stories from the contemporary, international world.

Musical theatre has the potential to be one of the most invigorated art forms. Through the choice of timely and interesting material, audiences will broaden their appreciation for musical theatre, as the musical theatre in Toronto begins to reach the same intellectual status as the dramatic theatre.”

All these years later, I am struck by the accuracy of that impulse – and the unique opportunity of that moment in time, to fulfill it. In those first few years of the 21st century, myself along with many others in Canada (and around the world), seemed to simultaneously recognize a renewed opportunity for musicals and – without any coordination – began a unified quest to reconceive the role of musicals in the arts ecology.

Back in 2003 when I first wrote those words, intimate & challenging musicals weren’t in fashion. Most of the celebrated thought-provoking musicals of the previous decade such as FLOYD COLLINS, VIOLET, HEDWIG & THE ANGRY INCH, A MAN OF NO IMPORTANCE, and TICK, TICK… BOOM! – only ran off-Broadway. A transfer to Broadway was unfathomable. When a more provocative musical did make it to Broadway, it consistently got passed over for more commercial fare. For six years straight from 1998 to 2003, the Tony Awards favoured blockbuster shows over their serious musical drama competitors, including LION KING over RAGTIME; FOSSE over PARADE; CONTACT over THE WILD PARTY; THE PRODUCERS over A CLASS ACT; THOROUGHLY MODERN MILLIE over URINETOWN; or HAIRSPRAY over AMOUR. In Toronto, our city was still in the midst of the long-running jukebox musical MAMMA MIA, and the movie musical THE LION KING had only just closed. Productions of HAIRSPRAY and THE PRODUCERS had recently begun runs with local casts, but non-blockbuster musicals were rarely on offer with any sort of regularity – let alone original Canadian musicals.

A lot has changed in 18 years.

As I sit in our office and look at a wall filled with posters of incredible musicals we have helped produce, I realize just how much the thought-provoking musical has become the norm rather than the exception. Both here at The Musical Stage Company, as well as with companies like Angelwalk, Eclipse, Theatre20, Theatre Sheridan, and others – I got to experience so many musicals that my teenage self could only dream of experiencing on Toronto stages. Thanks to partnerships, various non-musical companies in Toronto now regularly feature these sorts of productions with their seasons. Beyond the stage, a generation of young people have since accessed programs – launched over the years, neighbourhood by neighbourhood – that use music & storytelling to build their self-confidence & self-expression. Most importantly, our country is collectively uncovering the wealth of local writing talent for musical theatre; with homegrown musicals filling the playbill of theatres from coast to coast, with several of those musicals even going global and taking the musical theatre world by storm.

This mass appreciation for meaningful musicals has even spread to the most commercial of stages. In the six years leading up to COVID, the Tony Awards reversed the trend that was pervasive in the late 90s and early 2000s. Suddenly it was the intimate, thought-provoking musicals that consistently took home the top prize like HADESTOWN, THE BAND’S VISIT, DEAR EVAN HANSEN, HAMILTON, FUN HOME, and A GENTLEMAN’S GUIDE TO LOVE AND MURDER.

As a kid who made frequent trips to Song & Script to buy the newest off-Broadway cast recording for every unknown musical, having a front-row seat for this transformation into a mainstream embrace of the serious musical has been the fulfillment of a lifelong dream. While I know that this shift in taste is the result of countless efforts city-wide, nationwide, & worldwide – it brings me a tremendous sense of pride to know that The Musical Stage Company (originally Acting Up Stage) played its part in redefining musical theatre in Toronto.

More significant than this sense of pride, however, is a curiosity and excitement for what is yet to come. If musical theatre transformed this drastically over the last 18 years; what will it look like 18 years from now? I predict huge things for Canadian musical theatre both at home and abroad. In the years leading up to COVID, Canadian arts organizations had collectively just begun mining the potential of homegrown musical theatre writers; what was emerging was an infinitely deep talent pool with extraordinary stories to tell. I cannot wait to see those stories and artists blossom in the years ahead. I end my stewardship of The Musical Stage Company, confident that the organization has a collection of projects with remarkable potential; the most capable and visionary team; and a donor & audience community, who will be blown away by what awaits them. I am certain that as musical theatre continues to evolve, expand, & deepen its impact – The Musical Stage Company will be a vibrant engine; supporting incredible artists and delivering excellent musicals that advance the art form, to the public.

As I sign-off my Musical Stage Company accounts exactly 18 years to the day that I opened them, I am reminded that in Judaism, the number 18 is considered a special & lucky number; representing the Hebrew letters for the word ‘Life’. I have truly been the luckiest, and this life-chapter has been filled with the most inspiring collaborators, heart-opening experiences, and glorious music. I give my most profound thanks & gratitude to every artist, colleague, board member, supporter, partner organization, and attendee who has enriched my life in the last 18 years.