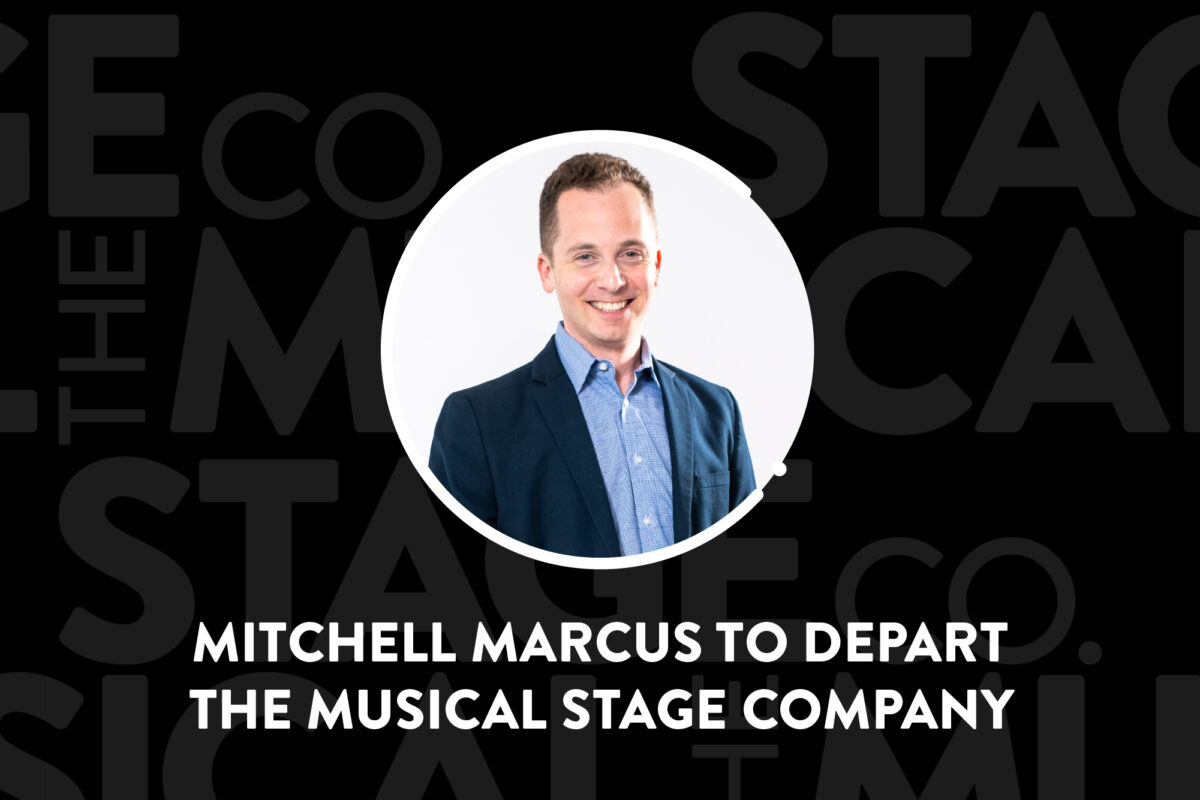 After 18 incredible years at the helm of The Musical Stage Company, Founder and CEO, Mitchell Marcus announces his departure to become the Executive Director, Site Activation & Programming for Northcrest Developments at Downsview. In this new role, Mitchell leads the process of establishing Downsview as a new destination for arts & culture programming, community events, and commercial initiatives, as part of the redevelopment of 370 acres that currently make up the Downsview Airport and hangar lands.

Since 2004, Mitchell has grown The Musical Stage Company from a start-up into the leading not-for-profit musical theatre company in Canada with a $2.8M budget, 30,000 annual attendees, and over 100 performances each year. Under his creative leadership, The Musical Stage Company transformed the Canadian musical theatre landscape, becoming an internationally respected arts institution that championed thought-provoking, contemporary musical theatre in Toronto, fostered a generation of Canadian musical theatre writers, and developed innovative community programs across the country. During his tenure, The Musical Stage Company received 105 Dora Award nominations, 23 Dora Awards, and 19 Toronto Theatre Critics’ Awards. Strategically, he helped the organization grow into one of the largest independent not-for-profit theatre companies in the history of Canadian theatre, with consistently balanced budgets, a robust and passionate donor community, and national and international partnerships. These achievements were recognized with Canada’s Top 40 Under 40 as well as The Leonard McHardy and John Harvey Award for Outstanding Leadership in Administration.

“There are no words to adequately express what the last 18 years have meant to me. I am ecstatic for this once-in-a-lifetime opportunity to help transform Downsview and create a new Toronto destination, but closing this chapter is incredibly bittersweet. I will be forever indebted to every artist, colleague, board member, supporter, partner, and attendee who has filled my life with infinite joy and glorious music. My pride in what we accomplished together is only surpassed by my excitement for the future of the company; with a stellar staff team and Board of Directors who will lead it into the future, and the homegrown musicals and initiatives that are in the pipeline, The Musical Stage Company, and Canadian musical theatre are undoubtedly going to reach new heights.” – Mitchell Marcus, Founder and current CEO of The Musical Stage Company.

In a few short weeks, The Musical Stage Company will unveil a 2022 season that is its most ambitious yet, featuring a multi-faceted program that will celebrate musical storytelling across the city, curated by Artistic Director Ray Hogg.