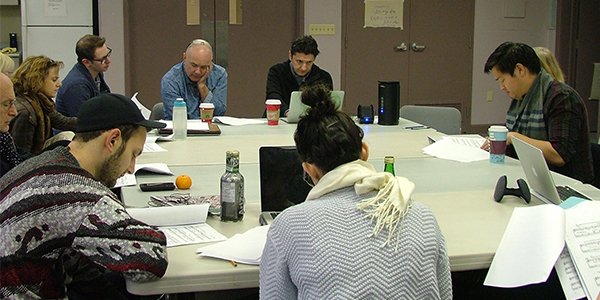 Kevin the Intern and Britta Johnson, in Reminiscent Conversation

On the heels of this year’s NoteWorthy program, I dragged in my pal and fellow NoteWorthy 2014 alumnus, Britta Johnson to reminisce with me in my latest blog entry!

In addition to being a Dora-Nominated writer on Reframed (for her beautiful piece He is Coming, written with Sara Farb) and being a recipient of the Paul O’Sullivan Musical Theatre prize in this past year’s Toronto Fringe Festival, Britta: (1) does a killer Bjork impression; (2) can make incredibly accurate trumpet sounds; and (3) occasionally TYPES IN ALL CAPS LIKE THIS. She didn’t do that this time though. Because we’re fancy musical theatre people.

Kevin: Can you believe it’s been two years since we did NoteWorthy?

Britta: I can’t – that’s inconceivable to me. I find the passage of time very disturbing.

Kevin: I just came from this NoteWorthy year’s final presentations this afternoon. Your sister is one of this year’s writers!

Kevin: When you applied/accepted your spot in NoteWorthy in 2014, what did you think you were going into?

Britta: I mean, I was still a music student at that point [Kevin aside: VOMIT at your youth, Britta!] and I was really just looking for ways to connect with the community and meet collaborators; I was very used to working on my own.

Kevin: See, I, in my folly as a newbie musical theatre writer, thought Mitchell would see my first song cycle and immediately insist that he produce it. In a year, I was sure I would be rolling in money, accolades, and sipping sangria with Stephen Sondheim while Broadway Bares dancers fanned us with palm fronds.

…But Mitchell, in his infinite wisdom and desire to have productions attended by audiences larger than ‘Kevin’s mom’, invited me to be a part of that year’s NoteWorthy instead. And that was good, too. 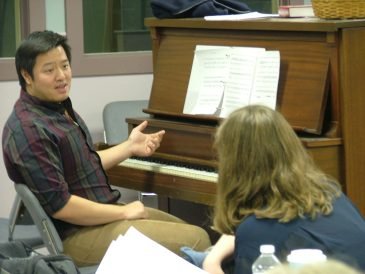 What was your first impression walking in that first day?

I was keenly aware of who all the people were in the room – I’d heard of all of them, I really respected their work, I felt like a bit of an imposter, I knew I was the youngest…

I was really scared! I knew who Neil Bartram (composition/lyricist mentor) was, I knew that Sybille Pearson (book writing mentor) was coming, and it was a theatre company that I respected a lot. So I wanted to prove that I deserved to be there, but that’s a difficult mindset to have.

Yeah that was my impression. And then everyone presented their first assignment, and everyone was a great pianist, and they were eloquently speaking about things I didn’t know about…and I wasn’t wearing the right shoes. I dunno. 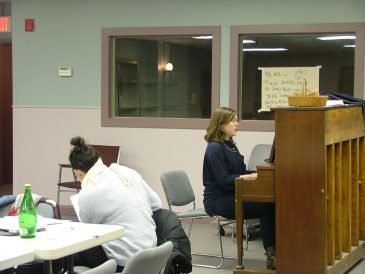 Kevin: I seem to recall that I just. wouldn’t. stop. talking. Like, I just kept. going. Because it was my vulnerability-compensation technique. And you didn’t speak almost at all.

Britta: No, but you were saying intelligent things!

Kevin: Was I, though?

Britta: You were! You were good at analyzing the music.

Kevin: Oh God. At what point did you feel like you were loosening up, and just able to let go and be in the process?

That was when I realized that it was O.K. – that we’re all just doing the same thing, it’s just a playground, and the stakes aren’t high – it’s just an opportunity.

It’s a privilege – you get to work your muscles in a completely safe environment with smart people who can help you to do it better.

Kevin: PS, these are such articulate answers! I have no idea what you were worried about before we started.

I remember that day because for that assignment, I showed up with this garbage half song – I’d decided on some horrible habanera-esque thing for three sisters. Matt Murray, my assignment partner, had worked so hard and given me a fully realized scene for three, and I hadn’t come up with anything inspired for musicalizing it.

And then you and Sara showed up with a fully realized 10-minute musical scene that was like, the filthiest thing I’ve ever heard.

Britta: It was very filthy. It was a lot of things I’d never said out loud before!

Kevin: It was perfect.

What was your favourite assignment?

Britta: I think the final assignment, where [Program Director] Robert McQueen laid out a series of different prints of paintings, and we selected one as a prompt. And I got to write ‘in-period’, which I’d never gotten to do before. I found that really joyful.

And I loved the short story adaptation exercise. Our short story was one of the best stories I’d ever read, and I really nailed that one! I think we both did.

Kevin: Yeeeah we did! (Credit to our collaborators on that assignment) 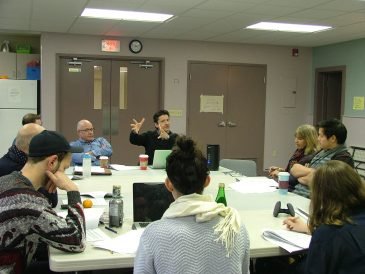 What do you feel like you got coming out of the program?

And I just felt more immersed in the community, which I hadn’t been. I’d kind of just been in school, and had moved here from my town. And then I got to know you, and know Farb, and all these other people who were trying to do the same thing as I was, and that was really exciting!

Kevin: Aww…oh gosh. And now look at you, rising into stardom as I slowly slip into obscurity…

Kevin: Entering into my dotage, a shadow of my former self…

Britta: I was just waiting for you to give a Wong-ism.

Kevin: Are we calling them Wong-isms now?

…My friends have an impression of me that is just (slouches) “Hi, I’m Kevin, I’m human garbage, sorry for existing.”

Britta: Truly though! Kevin, you are very accomplished. You are the Intern Artistic Director at the company we are talking about. It’s not as if you’ve sunken. You have much more power than I have!

[Kevin aside: At this point, I noticed that the three extra NoteWorthy rental keyboards I’d loaded into my car had crushed a box of chocolates in my car, and became sad. For all my Awesome Musical Theatre Power, I could not prevent forest fires, nor avert tragic chocolate smushings.]

Kevin: People just think we have power – my power extends to getting my superiors beverages and remembering the Wi-Fi code.

Britta: Well, you know, that’s a privilege. They would only ask the finest.

Kevin: On that note, I think we will wrap up. Thanks so much for sharing your thoughts, dreams, and rich inner life, Britta Johnson.

Still to come on future Kevin the Intern entries: