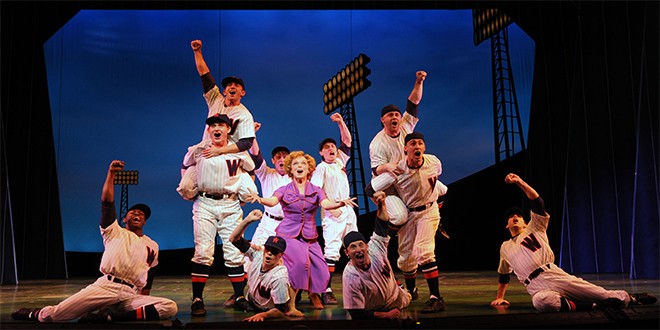 Falsettos, with a book by James Lapine and William Finn and music and lyrics by Finn. The story involves Marvin, his ex-wife Trina, his psychiatrist Mendel, his son Jason, and his lover Whizzer Brown. The musical premiered on Broadway in 1992 and will be revived in the 2016/2017 Broadway season.

“What I Call A Dream” – Diamonds

Diamonds is a musical revue about baseball. The book and music were created by many writers, composers, and lyricists. Among them were Ellen Fitzhugh, Roy Blount, Jr., and John Weidman (book); and Larry Grossman, Comden and Green, Howard Ashman, and Cy Coleman.

You’re a Good Man, Charlie Brown is a 1967 musical comedy with music and lyrics by Clark Gesner, based on the characters created by cartoonist Charles M. Schulz in his comic strip Peanuts.

Damn Yankees is a musical comedy with a book by George Abbott and Douglass Wallop and music and lyrics by Richard Adler and Jerry Ross. The musical is based on Wallop’s novel The Year the Yankees Lost the Pennant.

Ragtime is a musical with a book by Terrence McNally, lyrics by Lynn Ahrens, and music by Stephen Flaherty based on the 1975 novel by E. L. Doctorow.

“Give Me A Chance” – A League Of Their Own

A League of Their Own, based on the movie of the same name. Last time I heard about this show it was rumored to be Jason Robert Brown’s latest project.  When I looked it up I found a different musical with lyrics by Jordan Beck,  and Music and Orchestrations by Jason & Nolan Livesay. Hmmm… stay tuned for more information about this one!