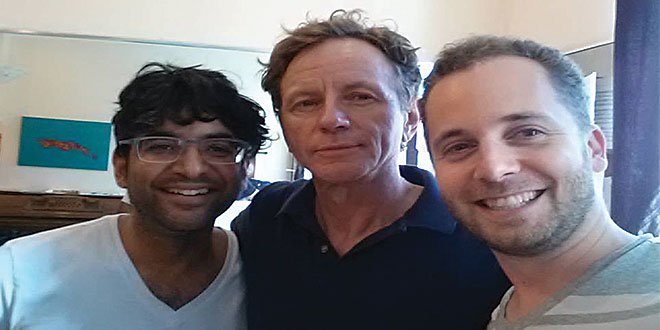 This time of year, I spend most of my days working at Reza Jacob’s music studio on Queen West. Set on the second floor of a three-story building, with apartments above and retail below, Reza’s studio has serious character with walls covered in mirrors and an old style bar tucked in the corner of the room hiding a sloped floor. Each day, we meet with one of the artists in UnCovered: Queen & Bowie. Starting with only a lyric sheet and a few ideas, a glorious, new arrangement of a Queen or Bowie song emerges through experimentation and collaboration within a few short hours.

Sometimes when I describe UnCovered as musical theatre artists singing pop songs, it comes across more simplistic than it truly is. The secret to the success of the concert is the rigour in creating each arrangement, resulting in pop song performances that are dramatically-sound, revealing a story or a character within the song that may not have been obvious in the original version. Applying standard theatre practice (i.e. discussions about character, arc, etc.) onto a pop song is tricky. In musical theatre writing, composers and lyricists are meticulous in giving actors and directors a roadmap for their work. In pop, that is rarely the case. As such, UnCovered offers a uniquely challenging puzzle, and one that is extremely rewarding once it is cracked.

Without giving away all of our secrets, here are a few glimpses into our process and practice:

1) We envision “the movie version” of the song.

At almost every rehearsal, we talk about “the movie version” of the song. If we were planning a cinematic adaptation, what would be happening? Who would be in each shot? What locations would be used for each verse? For example, in building Simon & Garfunkel’s “Homeward Bound”, we knew what was happening at each moment: when did the friends decide to take their road trip? When did they get on the bus? When did they fall asleep? At what moment did they both realize they had made a mistake?

Undoubtedly the audience will never be able to see the movie that we have created in our heads; UnCovered is not staged, nor are there sets or costumes. But having created a detailed storyboard informs the performance and the musical arrangement, creating a solid foundation for great storytelling.

2) We find inspiration in key lyrics.

Many artists (e.g. Simon and Garfunkel, Leonard Cohen) infuse their songs with clear stories. Others (e.g. Elton John, David Bowie) write lyrics that are more poetic and abstract. The latter situations are difficult as the song doesn’t always offer many clues for what style or approach will enrich its emotional intention. In these cases, sometimes a single line becomes the foundation for something amazing. For example, in “Mona Lisas and Mad Hatters” the lyric: “And I thank the Lord for the people I have found” became the inspiration for a song about building community. Beginning with just Jake Epstein on guitar, musicians and singers joined him slowly throughout the song, creating a beautiful, acoustic, joyful arrangement.

3) We use mash-ups to add clarity.

Sometimes we come up with an exciting approach to a song but worry that our idea won’t land because the lyrics are dense. In these cases, mash-ups have proven helpful. For example, in this year’s concert, “Modern Love” is a fantastic duet about anxiety within a relationship. The original song supports this idea musically, but the lyrics are complex. Adding in a little bit of “Crazy Little Thing Called Love” gave us a few key lyrics to clarify the story we are telling.

4) We challenge original tempos that contradict the lyric.

Very often we bop along to the beat of a pop song without considering the lyric. Sometimes the lyric is actually a heartbreaking story in stark contrast to the up-tempo rhythm it has been set to. For example, last year’s epic “I Am A Rock” sung by Louise Pitre showed what happens when a song about loneliness and solitude is set to a stark, slow arrangement rather than a driving rock beat. It was heartbreaking.

5) We meticulously use orchestrations and back-ups to add meaning.

Part of our rigour in the UnCovered process is knowing how back-up singers and instruments play a role in telling the story. In addition to filling out the musical sound, we also ensure we know who the back-up singers are (dramatically) when they sing (the lead singer’s conscience? A memory? An antagonist?). Similarly, the instruments chosen for each arrangement can help to set the mood for the narrative. For example, Robert Markus’s “You Can Call Me Al” last year was about someone battling (and beating) alcohol addiction. As such, Jamie Drake played empty beer bottles as the lead percussion in the arrangement. Will most audience members pick up on these nuances? Probably not. But we believe that the cumulative effect of all of these meticulous choices add up to something really special and viscerally moving.

At the time of writing, we have finished working 50% of the songs for UnCovered: Queen & Bowie. Undoubtedly, it is going to be a remarkable concert and already there have been some arrangements created that will bring down the house. I hope you will join us and – when you do – keep your ears and eyes peeled for these extra nuances. There are so many touches and intentions to discover in each arrangement.