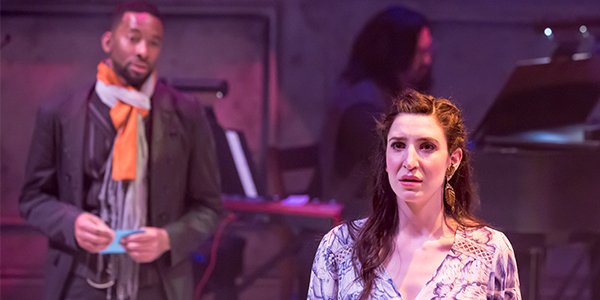 “If I wanted to live in love, in love. Then you are who I would choose.”

This high energy, utterly contemporary, musical adaptation of a 200-year-old story has won my heart. I am a big fan of adaptation and seeing how artists interpret other people’s art (Grey Gardens, The Wild Party, Reframed). Onegin is a particularly rich concoction featuring characters dreamt up by Alexander Pushkin, a structure crafted by Pyotr Tchaikovksy and the modern musical and dramatic stamp of Amiel Gladstone and Veda Hille. Plus how can you not fall for a show where the cast does shots with the audience in the opening number?

But beyond my admiration for the material and artists involved, there is a more profound reason that it’s been such a beloved experience to work on – because it is a new musical in the middle of its development.

This past February, as part of our major expansion and rebrand, we announced that one of our top priorities was to create original Canadian musicals, helping to make Canada a leader in musical theatre. On paper, this perhaps sounds straightforward. But the way this shifts our goals and philosophies is profound.

Productions of musicals that have already played on Broadway or in a major commercial production are generally considered ‘locked’ by their authors. We produce them to showcase the musical to local audiences. Productions of new musicals, however, are produced with the purpose of helping the work get stronger in addition to showcasing the work to audiences. New musicals grow under feedback and are in perpetual development. Where would Come From Away be without the development and multiple productions at Sheridan College, the National Alliance for Musical Theatre, Goodspeed, La Jolla Playhouse, Seattle Rep, Ford’s Theatre and Mirvish Productions before landing on Broadway in its completed form? Where would Ride The Cyclone be without the development and productions in Victoria, at Summerworks, in its cross-Canada tour, a production at Chicago Shakespeare and its recent off-Broadway run at MCC Theatre? Each step along of the way of these shows, writers presented audiences with a complete, well-crafted production to enjoy. But after each of these runs, the writers had the chance to learn from those productions and further fine tune the work, helping it to get better and better.

As such, when we are dealing with a new musical, we have the responsibility to create the conditions for not only a successful Toronto production which local audiences will enjoy but also the conditions for the long-term success of the work. In the case of Onegin, this commitment to new musical development (rather than just new musical presentation) shaped our decision to produce a brand new production rather than look to tour in the deliciously wonderful Arts Club version; to really contribute to the development, give writers the chance to learn more about their work and help line up the ‘next steps’, we needed to have a deeper relationship than presenting a locked, touring production.

Now that our production of Onegin is playing nightly for Toronto audiences, we are seeing the realization of these philosophies, recognizing how different the roles of our company, our audience and the critics are than on shows past.

In the past, when we were producing something like Grey Gardens, our goal was only to delight, enlighten and enrich audiences during the 4 week run in Toronto. After 4 weeks, some great reviews (hopefully!) and Dora Awards (hopefully!), our work was finished.

With a new musical, our goal is to contribute to a work that will live on forever in the canon of musical theatre, both in Canada and internationally. We, of course, still have the immediate responsibility to delight, enlighten and enrich audiences during the 4-week run. But our responsibility extends far beyond that.

During the run of Onegin, we have hosted several out of town producers from across Canada, the UK, and the US from the not-for-profit and commercial worlds. In soliciting these guests, we are hoping to drum up interest in other productions and development opportunities. Imagine if the learning from Toronto (and Vancouver) could be applied to a major development opportunity in the US and the show then went on to play several major American regional theatres before getting picked up by a commercial producer who moved it off-Broadway. It’s an ambitious trajectory, but it’s not dissimilar to what happened to Come From Away or Ride The Cyclone. New musicals are raised by a village. And each of us who touch them along the way has the responsibility to help the musical grow as much as possible and to be a part of making sure that there is a ‘next step’ to keep the momentum of development going.

2. The audience as a partner in development

New musicals give the audience agency. I have had rich conversations with attendees over the last few weeks hearing what they loved about Onegin and where they felt less clear. I share this feedback directly with the writers and it offers them hugely valuable information about how their work is being received, directly informing plans for the next draft.

The impassioned, nightly standing ovations tell us that people are enjoying themselves very much. But unlike when audiences had lingering questions or thoughts on pieces like Grey Gardens or The Wild Party or Caroline or Change (which we couldn’t do anything about), the questions and thoughts from attendees of Onegin actually give the writers the information that they need to make the work even better and stronger.

3. The value of reviews

On opening night I was talking to one of our guests who said: “I hope that you get 4/4 star reviews.” He was, perhaps, taken aback when I said: “I hope we get 3 or 3.5 stars because the piece needs to keep developing.” I am thrilled with where this new musical is after only two productions. But I can only imagine how far it will go as Ami and Veda continue to develop it.

In Vancouver Onegin received several 4/4 star reviews. I LOVED the production in Vancouver, but I also recognize that these reviews were coloured by a unique context, including, for example, a tangible enthusiasm from seeing a homegrown work with much potential. The positive result of this sort of emphatic response is that it generated great buzz and a sold-out run. But the consequence is that the writers missed the opportunity to hear from professional theatre critics what isn’t working as well as it could be. No one’s first draft (or second draft, or third draft) is perfect. New musicals are hard, and they are served by intelligent feedback, combined with enthusiasm for the seeds of greatness in the writing. Most musicals receive many developmental productions or out-of-town tryouts to allow writers to keep honing and fine-tuning before arriving on Broadway or a similar large-scale commercial production.

There is a famous story about A Funny Thing Happened On The Way To The Forum. It was failing with audiences until Jerome Robbins suggested they cut the opening song (then called “Love Is In The Air”) and replace it with “Comedy Tonight”. One smart person realized that the audience needed an invitation to laugh right off the top, and this small shift transformed the entire show. Suddenly it was a hit. It goes to show how sometimes one subtle change can transform the way a work is received. As such, well-considered criticism – alongside encouragement and belief in its potential (when there is indeed potential) – is a real gift for new work.

I am very grateful for the way audiences have embraced Onegin and excited by how much we (the writers and The Musical Stage Company) have learned thanks to the response of Toronto theatre goers. I am over the moon that we get to take the show to the National Arts Centre in Ottawa in September, giving the team a chance to further fine tune the musical and see how it plays in another market. Similarly, it is fantastic that the Vancouver production will be remounted at the Arts Club in the Fall before embarking on a Western-Canada tour. From coast to coast, our entire country – producers, critics and audiences – will have the chance to help Onegin continue to grow into another great Canadian musical because of these multiple production opportunities. And hopefully – through our collective work – it will have further life even beyond Canada.

If you haven’t done so already, I invite you to be a part of Canadian musical theatre history by participating in the development of Onegin. Snatch up one of the remaining tickets before it closes in Toronto on June 4; you’ll get to play a role in moulding the work through your applause, laughter and questions, and you’ll get to say “I saw it when!”