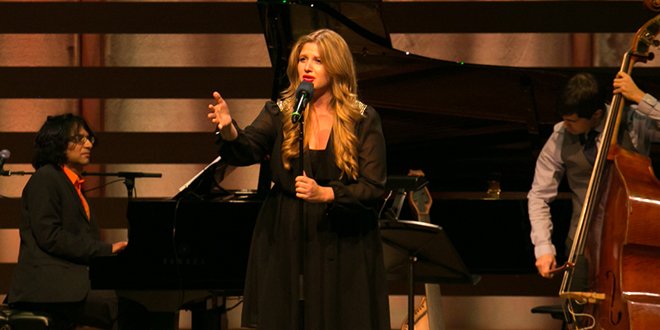 Get to know some of our favourite artists! Triple Threat is a regular feature that reveals which musicals left indelible impressions on the performers, musicians, and actors involved in Acting Up Stage productions. Up next is Kelly Holiff!

Kelly Holiff will look familiar to anyone who’s been to an UnCovered concert before – she’s an annual highlight of these shows, lending her powerhouse vocals to her unforgettable solos and backup arrangements (which she shares with Sara Farb, read her Triple Threat interview here). In addition to her musical theatre career, Kelly has performed in benefit concerts for organizations like The Heart and Stroke Foundation, Fallen Rock and Tim Hortons, as well as fronted bands in venues like the ACC and The Rogers Centre. Next up for Kelly is a holiday tour with Colm Wilkinson – but first, catch her in UnCovered: Simon & Garfunkel, November 3-5 and Koerner Hall!

As cliche as this is… Les Miserables. Also, Fame. Don’t tell.

Many years ago, before I ever knew that you could be an actor or entertainer as a profession, I went to a Unionville High School musical production called My Favourite Year. I watched in absolute awe as Alex Saslove (who I didn’t know back then) played the second banana part and stole the show. I’ve seen many outstanding performances.. but that was at the exact perfect time for me. I felt her bravery in the role and it made feel okay to make brave choices. And it was a high school production!

My first “real” community theatre show was in Grade 11. I played Wife #6 in The King and I. I mean, it was interesting. In Grade 12 I played Reno Sweeney in Anything Goes and that was that.

4. What is your dream role that you’ll (probably) never get to play?

Obviously any of the Dream Girls. And Matilda.

6. What movie or book would you love to see musicalized?

7. What band or singer would you love to tackle in an UnCovered concert?

Queen. Freddy is begging to be done.

8. Do you have any pre-performance rituals?

Oh yes. Performance depending, of course. But mainly whiskey.