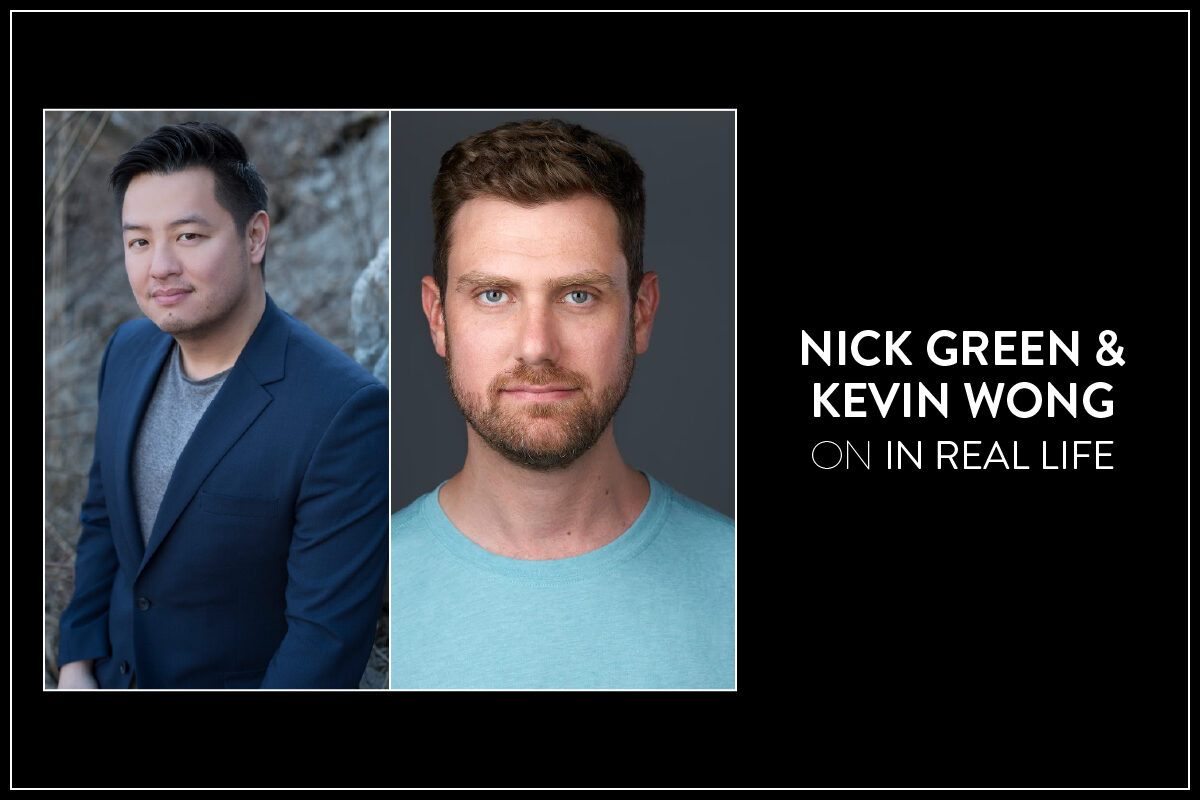 We sat down with IN REAL LIFE writers, NICK GREEN & KEVIN WONG, to discuss the process of writing, workshopping, and presenting a new Canadian musical during the age of COVID-19 and social distancing. Learn about the development of this exciting musical and the digital lessons that they have learned in the past 14 months.

IN REAL LIFE explores the story of a future world where all the students live in pods and communicate with each other via the screen.

Strangely, it’s like you predicted the present when you started writing this! How have the current events shaped the development of the story for you?

We always imagined the show being set in a very, very distant future, so it’s very surreal to find ourselves in such a familiar situation! If there’s anything positive to say about the situation we have found ourselves in during the development of the show, it’s that we have certainly gained a much deeper, intimate understanding of isolation and the potential of technology to connect us. We have seen some real low moments over the past year, but have also had really beautiful moments of connection with friends and family through platforms like Zoom.

Also, we’ve seen how easy it is to fall into a pattern of almost hibernation, where the choice to basically numb-out and let the days kind of fly by, gets more and more tempting. These are all really central themes to IN REAL LIFE, and it feels like we can speak on them with a little more authority.

When COVID hit, you were in rehearsal at Sheridan College for a student production of IN REAL LIFE.

What happened to that production when everything shut down? What has digital collaboration and writing looked like for you since March 2020?

Ah, March 13, 2020. A day that no one shall soon forget. It was a very disappointing day, for sure. We had a lot of hope that the Sheridan production was going to push us into a very critical stage of development, and the cancellation certainly took the wind out of our sails. Luckily we had a number of collaborators who were extremely forward-thinking and motivating.

Our director Ann Hodges and music director Chris Barillaro were both quick to brainstorm the logistics of moving the rehearsal onto Zoom, with the goal of creating a music video for our first number, choreographed by Janie Pinard, and designed by Nick Bottomley and Joe Pagnan. After taking a week off, we got down to work! Since then, we have had two online workshops of the show.

What are the biggest hurdles to overcome with digital collaboration?

There are several things that one must come to learn when workshopping a show over Zoom. Here are the top 5:

Are there any advantages to developing a new piece over Zoom?

A digital Zoom room, for all its limitations, enables us to create a pie-in-the-sky-esque list of dream actors for a workshop, even if they’re spread out across the country! We had actors interacting in our Zoom readings from Toronto to Montreal to Calgary to Vancouver! We got to meet and work with actors we’ve only ever dreamed of working with.

The other advantage is that we’ve saved quite a bit of paper! Using a shared Google Drive script for workshops has made it so that rather than send a new version of a scene for printing for 12 different actors, they can see the edit being made and read it out loud instantaneously.

Zoom is a difficult platform to work musically. How have you been able to hear your music during readings during this time?

Musicals are a theatrical form where singing is woven into the script – actors have to burst into song as a part of the story. Therefore, compared to plays, musicals already demand at least twice or three times the amount of rehearsal time, money, energy, etc.

And that’s in a non-pandemic world where you can be in the same room as someone, motion them closer to hear the note you’re playing better, breathe at the same time with them, and read body language, and more!

So on Zoom, that extra time and energy needed to teach and reproduce music is even greater. Complicating and delaying factors include, but are not limited to:

What writing practice have you learned during COVID-19 that you will continue in a post-COVID world?

Writing was already an often lonely and isolated practice before the pandemic. But at least then, we had the option to work-date with friends, meet with collaborators, and write at coffee shops to get a change of scenery. There’s some well-documented research about how different physical spaces help human beings compartmentalize their mental spaces. Without those options, we’ve had to be really rigorous about finding ways to delineate mental space between work and relaxation within the same small physical spaces.

We’ve learned to be a lot more rigorous (for our mental health as well as writing processes) about shutting out unnecessarily stimuli like social media feeds, especially first thing in the morning. We also have learned to be a lot more selective and judicious about the kind of additional work we take on. For example, a project that we accept out of obligation is going to drain a lot of energy and is going to likely take away from the energy we need for high priority projects.

The other thing that was starting to happen pre-pandemic was that writing was becoming tied to a lot of internalized pressure around a ‘deliverable’. We were worrying a lot about whether the next draft of the piece would be the draft that finally was deemed ‘produce-able’/’greenlight-able’. With the pandemic cancelling so many production trajectories and with the futures of so many pieces left uncertain, we really had no choice but to pare a lot of our expectations back.

After a period of mourning for what might have been, we’ve found it really freeing to return to initial impulses: what stories speak to us now? What are we compelled to say in this moment, absent of a producer’s expectations or pressure? What, in our storytelling, is joyful, pressing, empowering, and transformative for us as storytellers? In a state of perpetual lockdown with few productions on the immediate horizon, the practice of writing itself has to be what nourishes us. That return-to-impulses has been hugely liberating and an incredible reminder of why we’re in this field at all, and has the benefit of connecting the writing to our present with poignancy and relevance.