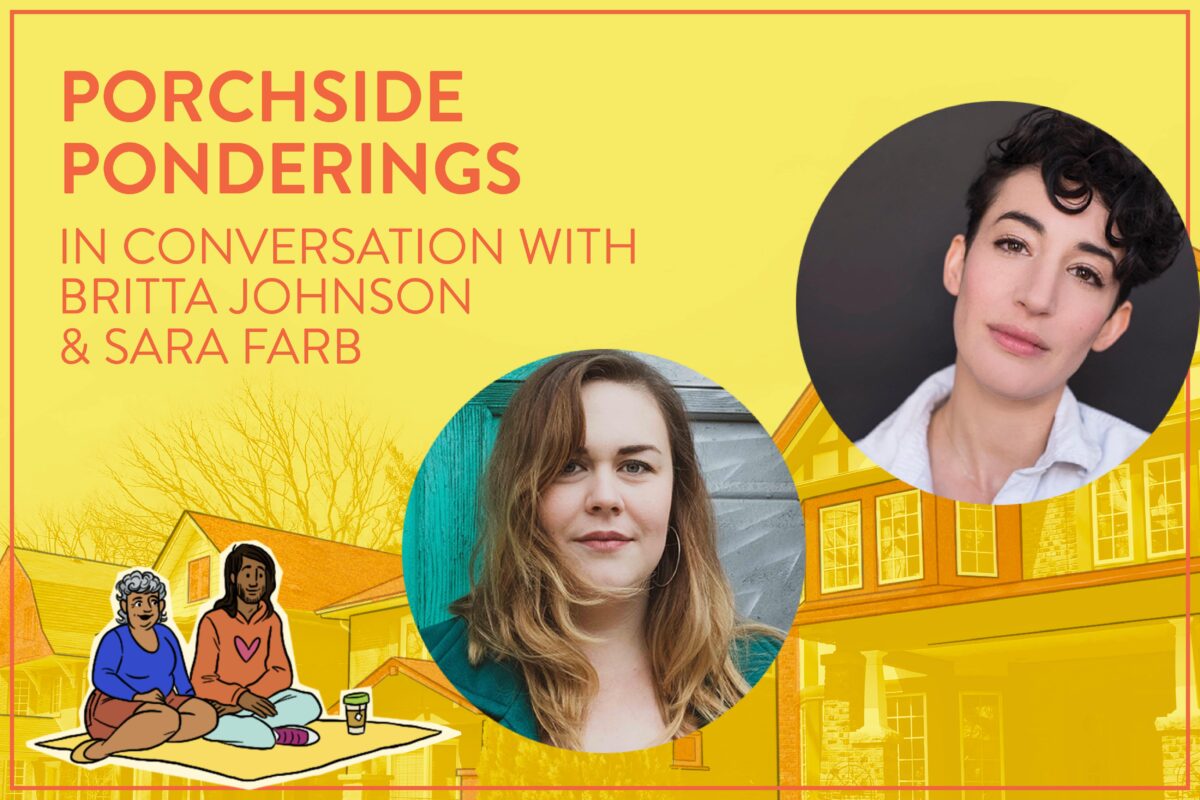 Tis the season for patio weather, music playing on the breeze, and the anticipation of catching up and pondering with friends on a warm summer day. Welcome to the third post in our series; ‘Porchside Pondering‘ with the performing artists of PORCHSIDE SONGS! We learn all about their work during the ongoing pandemic, their humourous approach to musicals, and hope for a promising future. This week, we’re sitting down with long-standing friends in performance and life, Sara Farb & Britta Johnson, of SAD LADY SONGS!

What is it about PORCHSIDE SONGS you are most excited about?

Sara & Britta: Performing in front of people in real life with a friend I trust and admire. I think having mutual support going back into live performance will make our respective Bambi legs a bit less wobbly.

How did you meet? Can you speak about your past collaborations?

Sara: We met at The Musical Stage Company’s NoteWorthy program in 2014. I’d heard of Britta as this prodigious musical talent and was intimidated by her at first, but we ended up working really well together. I think when we were finally paired, it felt very natural and easy. From that, we were asked to participate in REFRAMED, which was produced by The Musical Stage Company and the AGO, presented in one of the gallery’s salons. We had to choose a painting from that particular salon and use it as a prompt for a 20-minute musical, which we called HE IS COMING (also the title of the painting). The result was pretty pleasing to us both, and one of the songs from that show is in our PORCHSIDE SONGS.

Britta: Our first full-length show, KELLY v. KELLY was set to premiere in April of 2020, produced by The Musical Stage Company in association with Canadian Stage. Obviously, this couldn’t happen, so it’s been a real thrill to get the chance to work together again and bring some of the songs from that production to life. Making music with Sara is one of my very favourite things and getting to do it again really fills me with hope about what’s to come. It’s been a hard year.

Which artists or genres inspired your concert themes and setlist?

Sara: In writing together for a number of years now, Britta and I have found that we do our best work when we’re mining the depths of female despair and complexity. A blast! But that was sort of our jumping off point, looking at the work we’ve done together and what Britta’s written with others and alone. And a few songs by recording artists that tie in to this idea. It’s important to note this show will not bum you out. The songs are great and we will laugh a lot in between them and maybe during them.

Britta: Yeah… the sad lady thing is kind of what we are best at so we decided we should probably lean into that? But you will have fun!!

What has the rehearsal process looked like for your concert?

Sara: Rehearsal has been pretty casual. We both know most of the songs really well so it’s more of a review than anything. Things will kick into gear when we rehearse the patter, which will be aided by happy hour. Mostly it’s really exciting to be doing so many songs Britta’s written.

If there was an entire musical you could bring to people’s porches, which one would you pick? Why?

Sara: I have no idea. I feel like any musical would be a nightmare or a stroke of genius. It depends on the director. So let’s say a one-woman JEKYLL AND HYDE.

Britta: I’d be all in for a riveting, site-specific version of CATS with one or two performers pretending to be many many CATS. That would be a nice evening for me, I think.

If you could choose any musical artist to see in a PORCHSIDE SONGS concert, who would you choose? Why?

Britta: Yeah I would go to honestly any live concert anywhere on any porch, especially if I got to bring all of my friends. I really miss my friends. Sara is my friend so that makes this a GIFT of a gig! Have I mentioned it’s been so so nice to get to hang with her again??

As an artist, what have you missed most during the pandemic surrounding live events and performances?

Sara & Britta: Getting a real-time response from real alive people.

We have hope that these concerts can help bring some brightness to communities, and renew that hope for the future – what would you say your hopes are for the future of our theatre community?

Sara & Britta: That we all proceed forward remembering how painful it was without this thing, and feel gratitude that we are finally allowed to do this again. Also that we hold on to the promise of, and follow through on an inclusive, aware, and equitable industry.

SAD LADY SONGS! will start June 2021, as part of PORCHSIDE SONGS – taking place live and in your front yards, all across Toronto.

Learn more about the show and PORCHSIDE SONGS by clicking here.