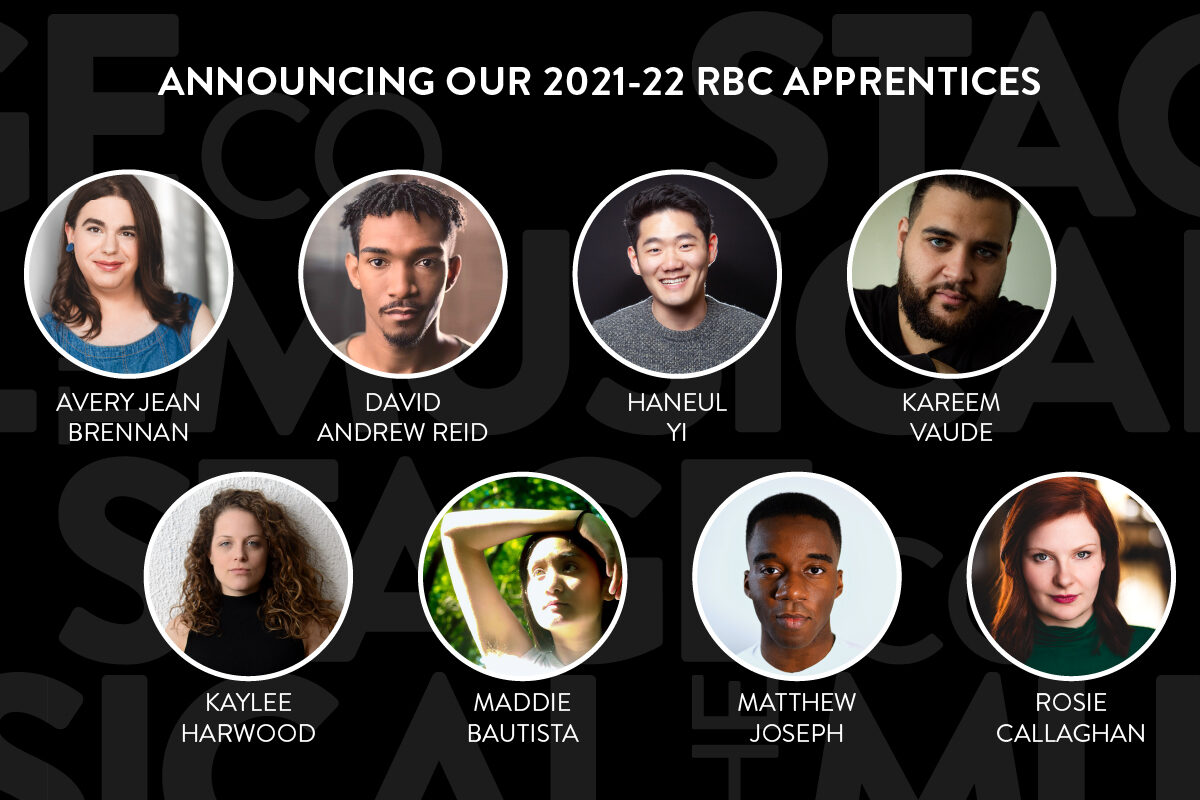 Our RBC Apprentices include the winners of The Syd and Shirley Banks Prize for Emerging Musical Theatre Artists, the recipients of the Kathleen C. Freeman Leadership Development Fund, and four other incredible artists.

Learn more about these artists and what they’re most excited for during their RBC Apprenticeship below!

Avery Jean Brennan is a Transfeminine actor, director, musical director, playwright, and producer. Over the past five years, they have facilitated workshops on Trans Inclusive Practices in the Arts; which they have led for theatre and film production companies across Canada. Recently, they were nominated for the Bra d’Or Award from the Playwrights Guild of Canada for their advocacy work. Avery Jean received their musical direction training through various Associate and Apprentice positions in theatres across Canada, including a residency through Neptune Theatre’s RBC Chrysalis Project. They have studied writing under dramaturg Christopher Weddell, composer/lyricist Leslie Arden, and through The Musical Stage Company’s NoteWorthy Program.

Avery Jean’s first original musical, THE PANSY CRAZE, was the recipient of Queer Theatre Toronto’s inaugural LGBTQ Fringe Award for pushing boundaries in representation for Queer & Trans characters in musical theatre. They are currently writing the book for multi-award-winning songwriter Gabrielle Papillon’s new musical, MIND THE LIGHT. Their most recent appearance as a performer was for a digital semi-staged presentation of their latest original work, NO COUNTRY FOR THEY/THEMS, which they produced through Eastern Front Theatre’s Stages Festival.

While Artistic Direction requires someone to wear many different hats at once, there are few training opportunities in how to wear those hats together. After spending the past few years honing my personal artistic & business mandates, producing practices, and creative practices, I am so excited to spend this year learning more about how I can blend them all together. This is exactly what I have been looking for as a next step in my journey as an artistic leader.

David is a Jamaican-Canadian theatre artist who moved to Canada to pursue his education & career. Graduating from Sheridan College with an Honours Bachelor of Music Theatre Performance, David has performed on stages across Canada, including Shaw Festival, Drayton Theatre, Neptune Theatre & multiple Elgin Theatre productions. David‘s journey as a choreographer has consisted of various dance captain, assistant & associate choreographer positions. He most recently made his solo debut at The Musical Stage Company as the Movement Director of BLACKOUT; thereafter as the Choreographer of INTO THE WOODS for Talk Is Free Theatre. David is very humbled and excited for this apprenticeship to further develop his craft a choreographer and artist behind the table.

The RBC Choreographer’s Apprenticeship represents a commitment to artist development in a time where the theatre industry is finally reexamining itself and is making (or should be) long overdue changes to how we approach creation, storytelling, hiring, rehearsing, community outreach, every fibre of what was established through the colonial lens. It is an exciting time to have this opportunity to observe, learn and share on the inside or “behind the table” during what will hopefully be the new age of theatre in Canada. I am most excited to work on multiple projects in varying stages of development and to collaborate with all the fantastic artists working on them.

Haneul Yi is a Korean-Canadian multi-instrumentalist singer-songwriter, actor-musician, music director/arranger. He is a recent graduate of the Honours Bach. of Music Theatre Performance of Sheridan College, and he is the recipient of the 2021 Jon Kaplan Award. Recent credits and training include: SPRING AWAKENING and the Charlottetown Festival Young Company – AQSARNIIT.

The RBC Apprenticeship is a big step and milestone in my journey. I’m excited to work with the most capable artists and creatives Canada has to offer. I expect greater things from this experience than I could have imagined.

Kareem Vaude is a Non-Binary, Arab-Canadian artist currently located in Tkaronto. They are a multidisciplinary creator whose skill set includes: acting, writing, directing, producing, and lyricism. Their personal and artistic mandate is to create/produce/act in works that tell the stories of marginalized peoples as well as advocate for equality and diversity throughout this industry. They are a graduate of George Brown’s 2020 Theatre School Ensemble where they trained in classical theatre performance. Kareem is the Co-Artistic Director for their company, G’RILLA INC. where they are fortunate to work alongside their dear friend and colleague, Nicole Pryce.

This opportunity has given me a sense of validity in this industry of the path ahead. As a multi-disciplinary artist, it has lit a fire within me to use this apprenticeship to not only grow as a director, but to also allow it to seep into my other skill sets and build up every aspect of me as an artist. I look forward to working alongside the incredible Ray Hogg, as well as the other stellar artists involved, and to collaborating to create a memorable and epic showcase piece!

Kaylee is excited to be pursuing mentorship in direction with The Musical Stage Company, where she’s been proud to have been part of developing new work as a performer over the years (REFRAMED, REPRINT, KELLY V. KELLY, & Launch Pad [2019]). She’s worked as a choreographer and dance captain, and has led masterclasses at U of T, Stratford, Shaw and TWU. Kaylee is also a voiceover artist, audiobook narrator, singing teacher, and since the shutdown has launched a fibre art business.

There’s an incredible opportunity, especially as we emerge from the collective devastation of the last year, for everything we know about how we create and the stories we tell to evolve. I aim to be an advocate for growth within our craft, mindful of traditions that have shaped our industry until now while expanding my personal vocabulary within the greater conversation to amplify voices that are traditionally diminished. Having been part of developing new work with The Musical Stage Company over the years as an actor, I know them to be committed industry leaders in every way. I am excited to learn from them in a structured manner how to nurture inclusive, open-hearted environments for our brave creative processes in my new field of inquiry as a director. This opportunity will allow me to narrow gaps in my experience and to be mentored by directors who are navigating our ever-evolving industry in real time.

The Kathleen C. Freeman Leadership Development Fund makes it possible for me to further advance my technical skill in sound design, braid my artistry with the fresh and necessary ideas of new musical theatre artists, and grow with community where I could not find a foothold before. This investment in early-career artists’ practice and imagination can birth works beyond the traditional canon’s most spectacular dreams. Let’s get this bread!

Matthew attended Sheridan College for the Honours Bachelor of Music Theatre from 2017 – 2021. While he was pursuing his degree, he was part of the Charlottetown Festival’s Young Company (2018 & 2019). There he made lifelong friendships, learned valuable industry lessons and became invested in bolstering and supporting the voices of indigenous creators. In 2019 Matthew and two friends formed the singing trio ‘CZN’. They have since released 12 singles and a 4 song EP on all major platforms, and recently appeared on AMERICA’S GOT TALENT, getting all 4 yes’ from the judges. CZN was also the winner of the 2020 Canadian Families Got Talent competition, where they were hand-picked out of thousands of submissions across Canada, by Simon Cowell.

My goal in life is to create art with inspiring individuals for as long as possible, and this opportunity with The Musical Stage Company is an incredible affirmation of that goal. I am consistently amazed by the minds that are part of [The Musical Stage Company’s] projects and am honoured to begin this exciting journey of collaboration! I can’t wait to learn all I can from this experience! Stay blessed.

I am beyond humbled that the team at The Musical Stage Company believes in me, and I cannot wait to begin learning with them! Receiving the Banks Prize is truly a culmination of hard work, perseverance, and continually refining my craft. I am so excited to be able to work under Canada’s leading artists and learn more about myself, my craft, and how I fit into the Canadian musical theatre landscape.