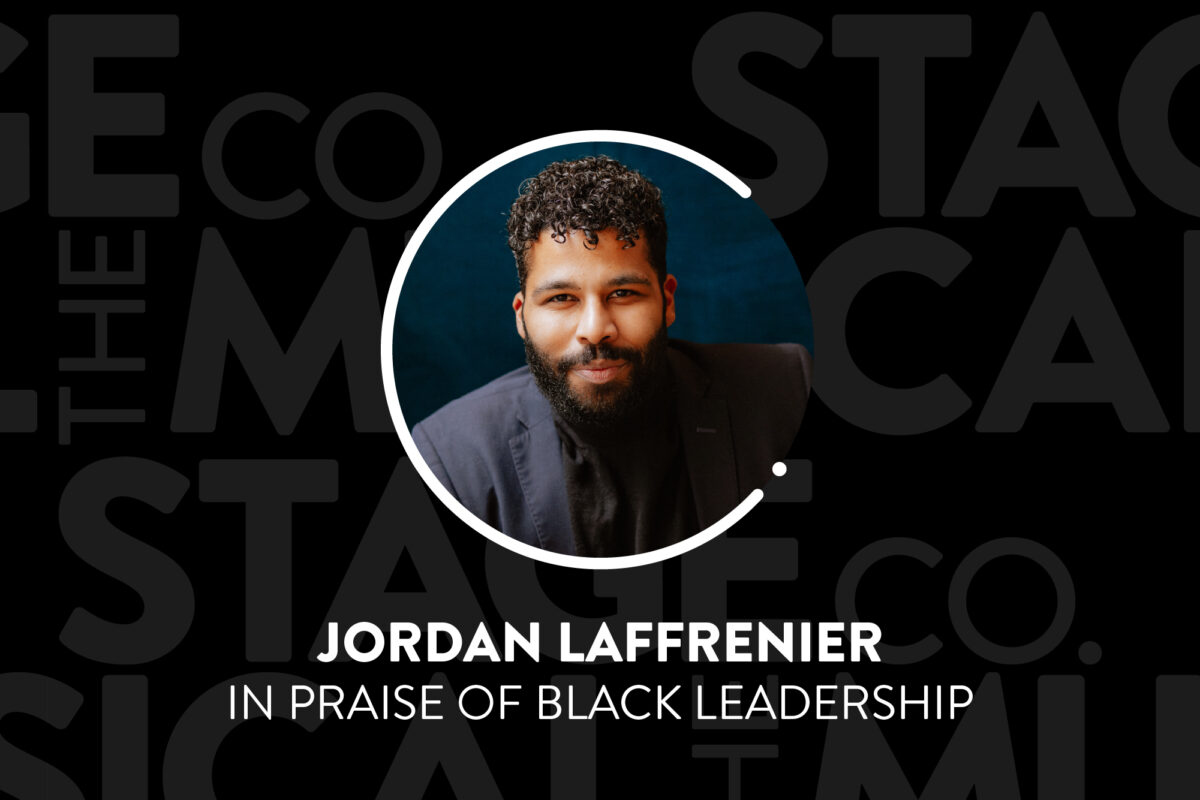 Posted on February 14, 2022
by Jordan Laffrenier

Black History Month for me has always been a month to celebrate. I used Ray’s questions as a jumping-off point to write a piece in praise of Black Leadership.

You always know when you’re in a theatre audience with Luke Reece; you can hear him. When Luke laughs, he tilts his head up or down depending on how funny something is. If you have the pleasure of sitting next to him, it is almost impossible not to laugh along. When something is really funny, he can’t stay still – his seat moves. If it’s a musical, when appropriate – he dances.

It was seeing, and then working on two of the musicals Luke produced, PASSING STRANGE and CAROLINE, OR CHANGE where first I noticed this phenomenon. Seat dancing. Pure joy. I had only met the writer of PASSING STRANGE, Stew, a couple of times but I imagine Luke is the type of audience that he was writing for; folks who would be moved by his work and who would also move with it.

The way Luke attends theatre is the way that he leads – responding deeply and immediately to what’s around him; moved by it and moving with it. In the same minute, Luke will be completely political and then immediately have the whole room erupting with laughter. He’s tapped in; to what’s immensely funny; to what’s immensely challenging; to what’s happening for the person next to him. He’s present. It’s the kind of leadership quality that turns theatres into communities instead of just organizations.

I did not know working with Bill T Jones would have the impact on me that it did. We collaborated while I was the associate director of a few workshops of PARADISE SQUARE – which is now in rehearsals for its Broadway run. If you have never had the pleasure of watching Bill T Jones dance, you should find some footage – he’s magnificent. And if you have never seen him choreograph, you should know that he is an absolute force. Bill’s not clapping out the eight count – he is telling actors that he wants to see, “God in their work.” And so they do. He is not only the best choreographer in America – but he is also an incredible mind, with a great knowledge of history.

In the 1600s when the first slaves were taken to America, they used drums as a way to communicate. By 1740, slaves having drums was outlawed – and so the drum became everything. They tapped on walls, crates, their own bodies – because you can take away a drum but you cannot take away the rhythm. Jones would be the first to remind you of this.

I used to follow him around, a couple of times ending up in rehearsal for a dance show that I had no part in. He would let me ask questions and he always had an answer. He would also ask me questions, which shocked me until I got to know Jones; this man who seemed to know everything was also deeply curious. Once during rehearsal, he asked a question that stopped me in my tracks, another Brother or Sister had been shot dead by the police and he asked, “do you think Black people are cursed?” I believe every Black person has at least once asked the question; am I the nightmare or is the nightmare happening to me? But the question had never been asked so directly. This is how he engages with art – exquisitely directly.

After George Floyd was murdered, I became numb. The final straw had broken for me. Within a week I had felt the full scope of human emotion, but mostly I was angry. Angry because I felt helpless. The conversations that people decided to have after that point were happening too late for me to engage; too many Black people had already been harmed, and the harm that we witnessed happen physically to George Floyd has been perpetuated in our institutions for too long.

At this point, I found myself as co-dramaturg for Cahoots Theatre’s Hot House Program. Tanisha Taitt came to the first session after the loss of Floyd and she opened a conversation. We all discussed where we were at, and we were all in different places; because we were all BIPOC and a few of us were Black – but our experiences of the event were not the same. I remember not knowing whether or not I would be able to show up to rehearsal until she told us it was enough that we just showed up. Cornel West has said that Black people taught the world how to love. I think Tanisha Taitt epitomizes this. The community that was formed in those Hot House sessions was like none other I have been a part of.

I think Germaine Konji should be protected at all costs and yet needs no protection. In fact, she’s probably protecting you. They speak in poetry. It’s often impossible to know if she’s quoting James Baldwin, Audre Lorde, Adrienne Maree Brown, or just speaking her own thoughts. She’s read all of their works, but if they came before she did – they would be quoting Germaine. I saw a Facebook post recently that asked who is in the next generation of Artistic Leadership; she is an obvious answer.

Germaine mentors their mentors and builds everywhere they go.

Though much (if not all), artistic leadership exists in the face of lack, delicate bureaucracy, and struggle in general – there is a particular version of Black leaders inheriting organizations that has become somewhat of a pattern of late. A friend of mine is the Artistic Director of a very broken organization. They inherited the organization that way, not knowing that it was as broken as it is, or just how in debt they are. And so they had to manage it, which is one thing – but they were also held accountable for it.

I’ve seen this a lot. “Here, have this position, take this space, this is your time,” only for the Black leader to discover the thing they have inherited is rotting from the inside. And then it’s “I guess they weren’t ready after all.” When white folks pass on their companies, institutions, organizations, etc with actual progress in mind; actual interest in uplifting marginalized voices and welcoming Black leadership – it will not look like this.

If you want us to thrive, to lead, and to do what we do best – let us.
Give us something good to work on – not something you’ve broken beyond repair.

I often wonder how Philip Akin has time to mentor all of the folks that he is mentoring.
I wonder how many people have been reminded of their EXCELLENCE by Kimberley Rampersad.
I wonder how many Black futures have been brought into reality by Mumbi Tindyebwa Otu.
I wonder how many people became artists and how many artists became holistic through D’bi Yong’s SORPLUSI method; a theatre practice passed down from her mother.
I wonder how Sadie Berlin became so courageous, so generous and so smart. (I also wonder if Sadie Berlin ever loses at trivia night)
I wonder if I will ever be as brave as Weyni Mengesha or if I will ever dance at one of her Sweet Sundays; the infamous dance parties she used to host for artists at her home.
I wonder if Ray Hogg ever actually sleeps, or if he just has a picture of himself sleeping that he looks at sometimes. I wonder if I would be where I am without him.

I wonder where I would be without any of them.